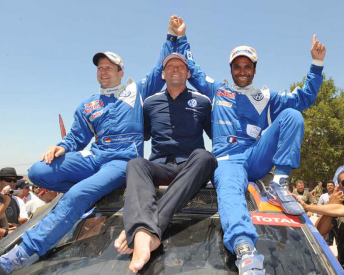 The Dakar Rally has come to its end for 2011

Nasser Al-Attiyah and Marc Coma have taken the Auto and Moto divisions respectively in the 2011 Dakar Rally.

Al-Attiyah’s first overall triumph on the Dakar is the third in a row for Volkswagen, having tasted victory in 2009 with Giniel de Villiers and last year with Carlos Sainz.

For Coma, the 2011 Dakar marks a third victory for the Spaniard – handing KTM yet another win in the first year of the 450cc era.

The final World Rally Championship-style 180km stage took competitors from Córdoba back to the rally’s starting point in Buenos Aires.

A commanding lead entering the final stage meant that Nasser Al-Attiyah could enjoy ever moment of the rally’s final day.

The 40 year old Qatari, who also competes in the Production World Rally Championship, was a comfortable second on the final stage behind Carlos Sainz.

“We did it. I am so happy,” said Al-Attiyah after the stage.

“We drove a good, clean stage. I was just thinking about the finish line.

“It means a lot to win a Dakar, for me, for my people, for my country and for my team. It is a great victory.

“It’s hard to explain everything that goes through your head. But it is a very nice feeling.

“We demonstrated that we have the strongest team in the world. It is the third time the team has won a Dakar. It is also the biggest moment in my career. I think that now people will finally know where Qatar is located.”

Sainz, whose performance on the day’s stage sees him surpass Stephane Peterhansel for all-time stage wins in the Auto divison, was philosophical after navigation problems, and a Stage 11 incident, cost the Spaniard any chance of victory.

“Before racing a Dakar, you know it will be tough,” said Sainz.

“I am not disappointed. This is how the race goes. After two tough weeks, there is nothing left to say. I gave it my very best shot.”

Rounding out the top five in the overall standings were BMW X-Raid team-mates Stephane Peterhansel and Krzysztof Holowczyc.

The Frenchman started the day second on the road behind Coma, and was unable to pass the Spaniard in the thick dust.

“Staying focused was essential,” said Coma of the last stage.

“What was really tough was that I could not let my guard down, not even for a second.

“We all know that a Dakar is a difficult race but this year it was particularly difficult.

“It (winning) is the bonus you get for steering right and for so many sacrifices over the years.”

Despres, who may have competed in his final Dakar, was pleased to make the finish after a difficult two weeks.

“The feeling of finishing a Dakar is always nice especially here with all the people welcoming you,” he said.

“I am sad I could not do better than this, though I raced 11 Dakar, won three and ended eight times on the podium.

“One more (win) would have been great, but I just could not make any better.”

It was a disastrous final day for Chilean Francisco Lopez. Entering Stage 13 third overall, Lopez suffered rear suspension failure at the halfway point of the stage.

After much assistance from his Aprillia team-mates, Lopez was able to reach the finish line – losing just one place in the overall standings.

Lopez’s problems were to the benefit of Helder Rodrigues, who took the final podium place.

Winner of the final stage was Dutchman Frans Verhoven, giving BMW its second win of 2011.

Jacob Smith and Simon Pavey have both made it to the end of the 2011 Dakar Rally.

In the Auto divison, Geoffrey Olholm took 28th overall in his Rallye Raid UK Desert Warrior after some 85 hours of competitive rallying.