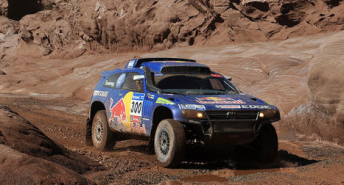 It was a record yet futile day for Carlos Sainz

After losing over an hour yesterday with suspension damage, Carlos Sainz proved a point on Stage 12 of the 2011 Dakar Rally – flying through the field from his poor road position to take a record equaling 23rd stage victory in the Auto division.

Of the Moto competitors, overall leader Marc Coma had the most to lose on the penultimate stage, but that didn’t stop him winning the stage with an impressive charge over the final kilometres.

The day’s 555km Special Stage between San Juan and Cordoba was shortened by 61km due to heavy overnight rain that played havoc with road conditions.

If Carlos Sainz wins the final stage of the 2011 Dakar tomorrow, he will surpass Stephane Peterhansel’s record to become the most prolific Auto stage winner of all time.

The record may be of little consulation to the Spaniard however, as he remains with just one overall rally victory (2010), compared to Peterhansel’s three, after the Volkswagen driver’s dramas yesterday cost him any chance of winning this year’s rally.

Sainz did all he could on Stage 12, fighting through from his 14th starting position to win the stage by three minutes from fellow Volkswagen pilot Giniel De Villiers.

Overall leader Nasser Al-Attiyah was just a further three minutes back, and now leads de Villiers by 48 minutes, with Sainz a further 30 mins behind.

“This victory is a small consolation,” said Sainz after the stage.

“We drove well. We had to overtake a lot of competitors. There was a lot of dust and we had a puncture. But the main thing is that we finished the day and Stephane Peterhansel didn’t get any closer to us.

“This 23rd stage victory is a good thing, but it wasn’t our goal. Peterhansel has 23 as well, so we’ll have to see who can get the record tomorrow”.

Peterhansel had closed with 13 minutes of Sainz after the former World Rally Champion’s problems yesterday, but his chances of taking third place plummeted when he suffered two new punctures and an over-heating engine (due to radiator damage) on the day’s stage.

Al-Attiyah meanwhile seems certain to take his maiden Dakar Rally victory tomorrow, and described Stage 12 as the hardest of his life.

“It’s a very difficult feeling, you know because you need a lot of concentration from the start until the finish,” he said. “You don’t want to make any mistakes. It really was the hardest stage of my life, because I had to keep concentrated and not make any mistakes.

“Sometimes I was going fast, sometimes slow because I needed to keep my concentration and keep the same pace, but it was ok.”

Marc Coma proved why he will be every bit the deserving winner of the Moto division of the 2011 Dakar Rally by taking Stage 12 over team-mate Cyril Despres.

Coma’s overall lead back to Despres remains over 16 minutes, despite the best efforts of the Frenchman. Despres led Stage 12 at the 240km mark by two and a half minutes, but a late charge from Coma cemented the Spaniard’s fifth stage win of 2011 – the 16th of his career.

Despres and Coma have won the Moto division alternately since 2004, with this year’s rally looking set to even the pair’s overall win tally at three apiece.

“Today was complicated due to all the rain that fell last night,” said Coma after the stage.

“As a result, it was a very technical stage, like in endurance racing. But it went fine.

“There is still a 190-km stage left to race tomorrow. Normally, there shouldn’t be any complications, but we still need to race them, it’s there to be done.

“It just shows that the route has been designed to ensure that there is suspense up to the end, so we’ll just have to wait and see tomorrow”.

Staring on Stage 12 was American Quinn Cody on his Honda 450. The leading “rookie” on the Dakar picked up a fine 5th place just behind Lopez.

Tomorrow’s final stage of just 181 km will take competitors from Córdoba back to the rally’s starting point in Buenos Aires.