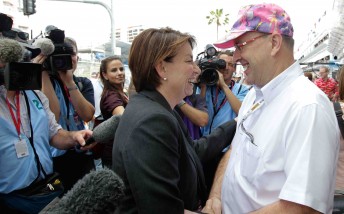 V8 Supercars Australia has put its money and its manpower into assisting the recovery from the devastating Queensland floods, donating $50,000 to the Premiers Flood Appeal.

V8 Chairman Tony Cochrane announced that the Board of V8 Supercars and its teams were donating the cash, plus a number of people to provide their time and resources to helping those in need.

Cochrane will make the announcement of the cash donation at tonight’s ‘Mates in Need Street Party’ organised by Harvey Norman, Myer and V8 Supercars to coincide with the Magic Millions Carnival on the Gold Coast.

“These are 10s of thousands of proud Queenslanders who are in dire consequences right now, many of them being our fans and our friends,” Cochrane said.

“Whether it’s Rockhampton, Chinchilla, Goondwindi, Gympie, Brisbane, Toowoomba, Ipswich or any of the devastated areas, we have massive fan bases in all of them and they need our help. V8 Supercars wants to do its part in any way we can.”

Most of the staff from V8 Supercars Gold Coast headquarters volunteered for the night selling raffle tickets, providing prizes and giveaways, taking donations, organising the logistics and providing V8 Supercars, trucks and other hardware.

2010 Champion James Courtney and former Champion Russell Ingall represented the drivers on the night while others such as Steve Johnson joined in the recovery effort in Brisbane.

Many V8 staff have been directly or indirectly affected by the floods but haven’t hesitated to fill sandbags, help clean streets and houses, donate funds and support.

A V8 Supercars office whip around also bought a sizeable amount of essential items that was donated to the Gold Coast City Council hamper appeal and V8 Supercars was also donating a significant amount of clothing, merchandise and goods from its storage facilities.

“We are an enormously proud Queensland-based organisation with more than 800 full-time staff living either in Brisbane or on the Gold Coast,” Cochrane said.

“We have a similar number of people living in Victoria affected by the bushfires that are now kicking in for Queenslanders in any way they can.

“Our thoughts and prayers are with all of these people across the state who have suffered immeasurably in recent weeks from a disaster that will take months and years to recover from. Despite this we know they will fight hard and get through this.”