Kelly Racing plans to be the fittest team on the V8 Supercars grid in 2011.

Australian tennis fitness coach Damian Prasad, who has worked with Kelly Racing’s drivers and crew over the past two seasons, says he will help take the team ‘to the next level’ this year.

Prasad is the fitness coach to ATP World Tour professional Thiemo de Bakker, ranked 46th in the world and one of the young, up and coming stars of the Men’s Tour.

Drivers Rick Kelly and David Reynolds were to hit with Prasad and de Bakker today, but torrential rain in Melbourne this morning forced them to duck for cover on Margaret Court Arena.

Rick Kelly admitted that he was relieved in one sense when heavy rain descended on the court surface.

“I think it was a positive for me because my tennis skills are not that good,” said Kelly.

“But it was awesome just meeting Thiemo and walking around Melbourne Park and seeing all the best tennis players in the world.

“We even got into Rod Laver Arena and saw Venus Williams training.” 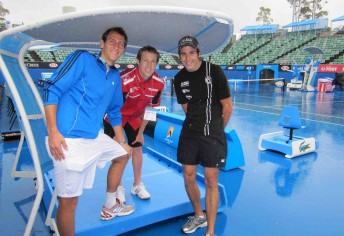 de Bakker and Reynolds were disappointed with the weather on Margaret Court Arena. Rick Kelly wasn't ...

Reynolds on the other hand is keen tennis player, using the game as part of his rigorous fitness regime that also includes cycling and triathlon competition.

“I love tennis, love watching it and playing it,” said Reynolds.

“It’s a real sport in that it’s a real battle out there. It’s such tough conditions for the players sometimes that you see the players fade away and then come back.

“It’s a real street fight out there and it is probably one of the few sports that is actually like that.”

Kelly said that Prasad is a vital part of Kelly Racing’s assault on the V8 Supercars Championship.

“Damian for us is an exceptional trainer and he has brought a lot to the team over the past couple of years,” said Kelly.

“We are looking forward to working with him again in the future and it shows today the level his knowledge is at in that he trains one of the top 50 players in the world.”

Prasad says that the time is right for Kelly Racing’s drivers to take their fitness to the next level, with major effort going into that area of the team over the off-season.

“We have already been speaking over the off-season, working on the 2011 season to make sure we have the right strategy in terms of pre-season preparation, maintenance during the season, having the right amount of rest and also building up fitness throughout the year,” said Prasad.

“So it really comes down to having a periodised plan.”

Prasad expects that the addition of Reynolds to the four-car squad will push the whole team forwards in terms of fitness.
“It’s good to have Dave onboard,” said Prasad.

“He is big on the fitness and triathlons so it’s going to be great to work with him.

“He is going to raise the bar and is going to give the guys some stiff competition in the gym, so it’s really healthy to have someone like him join the team.”

de Bakker says that he has heard lots about the V8 Supercars Championship from Prasad and likes to keep up to date with the progress of Kelly Racing.

“I ask him sometimes, we are together a lot and I like racing as well so I like to keep up to date,” said de Bakker.

de Bakker will play 12th seeded Frenchman Gael Monfris in the first round of the 2011 Australian Open next week.

The men’s singles final is scheduled for January 30 – the day after Kelly Racing has its first hitout for 2011 at Eastern Creek’s official V8 Supercars test-day.