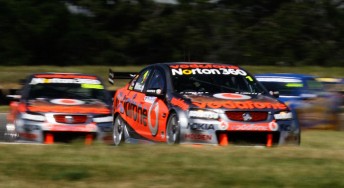 The TeamVodafone pair of Jamie Whincup and Craig Lowndes

After four years sporting the distinctive ‘rocket’ or ‘fluro’ red look, complimented by chrome detailing, the front-running Commodore squad is close to signing off a brand-new livery for the new season.

TeamVodadone’s commercial manager Peter Jamieson said that the final look and feel of the team’s car is not officially locked in, but confirmed that black is a favourite to be splashed onto the panels of the #88 and #888 cars of Jamie Whincup and Craig Lowndes respectively.

“We’ve had a look at a number of different options for our new livery, one of which involves a very strong black carbon effect,” Jamieson told Speedcafe.com.au.

“But we’re not locked in to any colour scheme at the moment.

“We’ve almost created our own brand in our own right with the chrome and rocket red. When we’ve invested so much time and energy into that brand, why would we change?

“We have a good DNA with the chrome and the rocket red, but managing that and keeping the cars relevant is important.”

The final look of the cars will be revealed in Sydney the day before the Eastern Creek V8 test on January 29.

While the look of cars might be different to previous seasons, don’t expect any change on the sponsorship front. All of the team’s major partners – Vodafone, Nokia, Komatsu, Caltex, Norton 360 and Holden – remain unchanged.

“It has been a conscious decision for us to recruit partners that are not just for one year,” Jamieson said.

“When things go right, like winning Bathurst, it makes things easier, but on the other side, none of our team partners were disappointed with the fact that we lost the driver’s championship because it has given us something to chase for this year. They took it with that approach.

“At the end of the day, they all got good coverage, but we want to make sure that the category remains viable and interesting and there’s a lot of enthusiasm to win.

“The relationship that our partners have is that they know we can’t win everything – they just want us to try our best.”