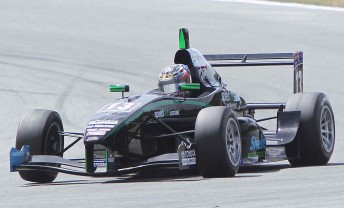 Australian driver Nick Foster has unveiled a striking colour scheme for his maiden run at the Toyota Racing Series in New Zealand – supported by Speedcafe.com.au.

The Formula Ford front-runner, who finished third in last year’s Australian Formula Ford Championship, completed his first laps in the TRS cars at Teretonga yesterday, finishing with a best place of eighth in the four practice sessions. 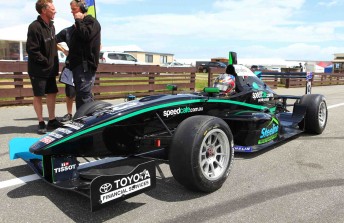 “The black and green colours look pretty cool out there on the track and I’m happy to be spreading the Speedcafe brand to Kiwi fans this summer,” Foster told Speedcafe.com.au

“I’ve already had lots of comments from fans seeing the logo on the car who know about the website already. I’m pleased with how the car looks and keen to perform well for Speedcafe.com.au as well as Steeline over here in New Zealand.”