Disaster for Sainz on the Dakar

Disaster for Sainz on the Dakar 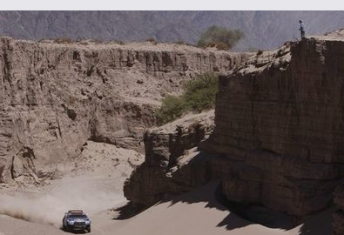 In the Moto division, Cyril Despres scored his third stage win of this year’s rally, but could only close the gap to overall leader Marc Coma by two minutes.

It was a disastrous day for reigning Dakar Rally winner Carlos Sainz. The Spaniard, determined to make up the 10 minutes lost to overall leader Nasser Al-Attiyah yesterday, pushed hard through the opening kilometres this morning to catch up to his team-mate on the road.

Having looked likely to win the stage, Sainz made a mistake in Al-Attiyah’s dust – hitting a hole and ripping his right front wheel off. While Sainz, with the help of team-mate Mark Miller, did get his Volkswagen to the finish line, he lost one hour and 15 minutes to Al-Attiyah, and now sits third overall.

“I pushed as hard as I could and when I was in Nasser’s dust, (and) I didn’t see a hole,” explained Sainz.

“I went straight into it and broke the suspension. I tried everything I could to go on the attack, because I haven’t come here to finish second.

“For me it’s first or nothing, so finishing second or third is the same”.

Cyril Despres took the 26th Dakar stage victory of his career on Stage 11 – moving him to just one behind Jordi Arcarons and six behind the record holder in the bike category, Stephane Peterhansel.

Like Sainz, Despres had begun the day determined to make up for the time he lost in Stage 10. The Frenchman closed down the two minute starting gap to be just 29 seconds behind at the stage’s halfway point, and subsequently passed the Catalan with 30km remaining to take a two minute stage win.

It was a pleasing day for Coma however, with another day down, and his overall lead still a comfortable 16 minutes.

“(But) there’s still tomorrow which will be a hard day, so anything is still possible. Tomorrow evening, we’ll obviously be closer to the finish, but I have to make sure I get through the day okay.

“A calm approach is best: if something happens, then I’ll just have to adapt, but if I take things professionally, then it should all be ok.”

Francisco Lopez, third in the overall standings but out of contention for victory, had arrived at the neutralized halfway point a minute ahead of Coma, but a misread note in the roadbook ensured the Chilean would come home third on the stage.

Fourth was another strong performance from Heldor Rodrigues, while Frenchman Alain Duclos had his best stage result of 2011 with fifth.

Seventeenth on the day’s stage was Jacob Smith – whose time of five hours and three minutes saw him just over half an hour behind Cyril Despres at the end of the stage.

Smith is now 37th overall, while Simon Pavey, the only other Australian left in the Moto division, had another troubled day to take 85th on the stage. Pavey now sits 72nd overall.

Special Stage 12 marks the penultimate day of the rally, and the last true test for competitors. The 555km special from San Juan to Cordoba will feature a sandy start for the first 100km.