David Sera suits up for another US campaign

David Sera suits up for another US campaign 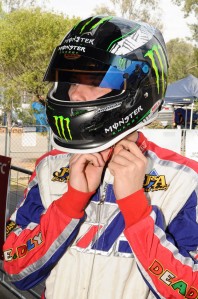 David Sera will suit up for another US campaign over the coming months. Pic: Kart X/Budd

Australian karting champion David Sera will head to America next week to compete in the opening round of the Florida Winter Tour to be held in Orlando.

It will be the second time Sera has competed in Florida after winning two rounds of the series in 2009, unfortunately commitments in Australia forced him to miss the second weekend of the series leading him to finishing fifth overall for the Tour.

This year the young Melbournian has got his sights set on the championship title, with the winning prize a trip to the Rotax Max Grand Finals to be held in Dubai later this year.

“After tasting success last time I was over here, I feel confident that I will be able to challenge for round victories and also the championship,” said Sera.

“To get back over to Dubai is the goal, as I qualified fastest there last time, and won a couple of heat races.”

Sera will once again team up with KartSport North America who he recently raced with back in November at the SuperNats in Las Vegas, finishing second by 0.001 of a second in amazing fashion after starting 29th in the final.

“To team up with Eric Jones and KartSport is fantastic. They are really running a professional outfit, and have a very good combination of drivers racing throughout the classes. I am sure that we can all benefit from everyone’s input,” added Sera.

Not content with just focusing on his US campaign, the Monster Energy-backed driver will jet back into Melbourne the following week to compete in the opening Rotax Pro Tour event in Port Melbourne (January 28/29).

He will then return to America in both February and March to contest the final two rounds of the Winter Tour to be held in Palm Beach and Ocala.