Lucas Dumbrell Motorsport will enter its second season of V8 Supercars racing with a new engineer and a fresh approach.

Will it make the difference? Speedcafe.com.au’s News Editor Grant Rowley spoke to the youngest V8 team owner in the paddock to get the lowdown on his new engineer and his expectations for driver Warren Luff and his team for the upcoming season.

SPEEDCAFE: So, you’ve got a new engineer for the 2010 season – Rob Palermo. How do you think he will go?

Rob started yesterday as a full-timer, and I think he’ll do a good job.

He’s an old mate of Dean Orr (team manager), and he came on board with us at Tassie and Homebush just to give us a hand doing a bit of data work. We wanted someone with a bit of experience.

As it turns out now, he’s come on full-time. 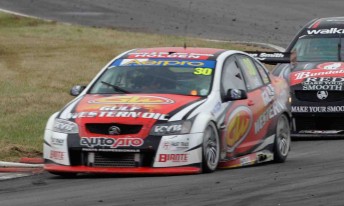 I think Warren and Rob will work together extremely well.

One-on-one, they already seem to get along well, we had a meeting yesterday and they’ve put together a bit of a plan for the test day.

The biggest thing is that he is full-time and he can make sure that every facet of the engineering is covered.

SPEEDCAFE: How does this change your relationship with Walkinshaw Racing?

We’ll still purchase Walkinshaw’s IP, but we’re not employing one of their staff like we did last year. Our relationship is still the same with them, but we wanted to go our own way.

SPEEDCAFE: When do we expect to see the new colours for the #30 Gulf Western Oils entry?

LD: I’m trying to put together a bit of a plan to launch the car – probably in the week leading up to the test at Eastern Creek.

We’ve got some cool stuff organised so I wouldn’t be surprised if it gets a run on the TV stations.

SPEEDCAFE: What do we expect in terms of the look?

LD: It will be quite similar, but where it was white, it will be black. I think it gives it a bit more of a meaner look compared to last year. Everyone has complimented us on the artwork.

Like last year, Holden Motorsport has done the designs and I think everyone will enjoy it.

SPEEDCAFE: If there’s one thing that you’d like to achieve this year, what is it?

LD: Obviously, we’d like to get a podium, and that would be a fantastic result for the guys. As you know, there’s more soft tyre races this year, and I think that’s going to open up the possibilities of more random results at certain places. We have to get our strategy right as well, but yeah, a podium would be nice and a top 10 result at Bathurst as well.