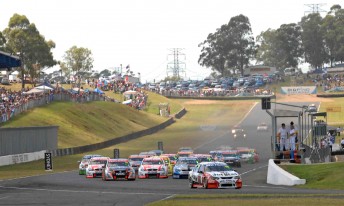 Will Davison leads the field at Eastern Creek in 2008

While this month’s pre-season test day will mark V8 Supercars’ first official visit to Eastern Creek Raceway in three years, the category is unlikely to race at the Sydney venue anytime soon.

According to V8 Supercars CEO Martin Whitaker, a successful January 29 test will not bring about the track’s readmission to the championship.

“I think we’ve got the bones of what is a very good calendar now.

“I think now it’s a chance to stabilise that, to make more of what you’d call our heritage events, and raise the championship’s profile in terms of overall presentation and general awareness.

“So when we do add a few more (international) races to the current one that we have in Abu Dhabi, we have something which we’re genuinely proud of.”

Despite the lack of desire to race at Eastern Creek, Whitaker said the category is aiming to make the pre-season test an annual event for the venue.

“If anything with Eastern Creek, we will try to grow the test event and see what we can develop that into,” he said.

“A test is never going to become a race, but nevertheless we’ll take a review after this year’s test, and if it works for us, maybe it’s something we can build on in the future in terms of making it bigger and bolder.”

Whitaker also believes that pulling 40,000-strong crowds, similar to pre-season Formula One tests, isn’t out of the question in the long term.

“I think those are the sort of numbers that V8 Supercars can deliver in the future,” he said.

“We’re not looking at those sort of numbers the first time we go and do it, but we’ve got a massive following …

“I think when Eastern Creek came off the calendar there were a lot of people who were upset about the fact that it was no longer there.

“Ok, we’re not racing there, but I think the important thing is that we are running there, and I think we’ll have a great day on the 29th.

“It’s not everyday you get to see the teams testing in their new colour schemes, with new driver line ups as well of course.

“It’s a chance for everybody in that part of the world to get first-hand exposure to V8 Supercars before we head over to Abu Dhabi.”