Porsche 918 RSR points to past and future

Porsche 918 RSR points to past and future 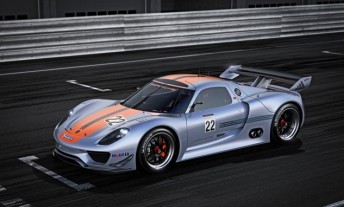 The Porsche 918 RSR as it would look on-track

Porsche has payed homage to its past while pointing towards the future with its 918 RSR ‘race lab’ showcar unveiled at the Detroit Motorshow.

According to Porsche, the 918 RSR is the result of combining the technology from the 911 GT3 R Hybrid that competed in the 2010 Nurburgring 24 Hours with the 918 Spyder showcar also seen last year. 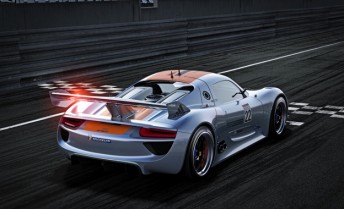 The legendary 917 model took Porsche’s first outright wins at Le Mans in 1970 and 71, with the latter race setting a distance record that was not surpassed for 39 years.

The hybrid 918 RSR underlines Porsche’s desire to compete in motorsport with ‘green’ technology.

While a 420 kW direct-injection V8 engine powers the real wheels of the 918, a Kinetic Energy Recovery System captures energy from the car’s front brakes, which is then delivered to electric motors attached to the front wheels.

The KERS uses a flywheel to store the energy, rather than batteries as seen in Formula One. The KERS flywheel sits in the front passenger seat

The flywheel reportedly spins at up to 36,000rpm, and sits to the right of the driver in place of a front passenger seat.

In a media statement, Porsche describe the 918 as having “race track intent,” adding that:

“Porsche is now elevating this motor racing hybrid concept to a higher level where sustainable efficiency can be proven under intensive racing conditions before lessons learned can be transferred to regular production cars.”

While top-level GT racing does not currently cater for hybrids, the Stuttgart company could develop a hybrid prototype sportscar for Le Mans – but is unlikely to wish to compete against the TDI Diesel technology of sister-company Audi.

See below for Porsche’s official video explaining the 918 RSR