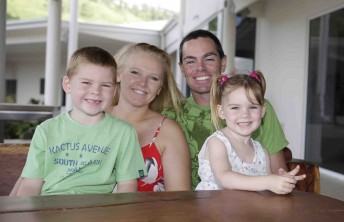 Craig Lowndes with his family Levi, Natalie and Chilli

The increased intensity of the Queensland floods is taking its toll on many families in southern Queensland – including the Lowndes residence.

V8 Supercars champion driver Craig Lowndes is currently in Melbourne with his two children Levi and Chilli while his wife Natalie is trapped on their property at Kilcoy in Queensland’s south.

His visit was meant to be quick summer break to see family, but he is now unable to get back to Brisbane due to the floods that have rocked Queensland over the past two weeks.

Nine people have been confirmed dead and grave fears are held for 66 others after last night’s unprecedented flash flooding.

The town of Toowoomba was hammered by an inland tsunami. CLICK HERE for Speedcafe’s news story with native Toowoomban IndyCar driver Will Power’s take on the natural disaster. 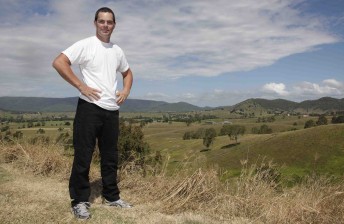 Craig Lowndes on his farm in Kilcoy, Queensland

Lowndes told Speedcafe.com.au that Natalie is safe, but the town of Kilcoy has been completely isolated by the deluge.

“Nat was texting me just a minute ago that the Caboolture, which comes off the Bruce Highway, is basically isolated, and it looks like it will exceed the 1974 floods. It’s not a pretty situation.

“It’s a huge drama. We’ve lost power – the whole area has lost power. The area is an old established area with old wooden bridges. A lot of them have been washed away with the current and the strength of the water that has been flowing over them.

Lowndes confirmed that Natalie is sitting tight with neighbours as they wait for the worst of the weather to subside.

“We’ve got neighbours and a friend who lives on our property at our house, Kevvy. He’s basically in the same situation so they have come together to help each other,” he said.

“Nat is running the house off a generator, so she has limited power so she can keep the fridges and stove working and what not. She has plenty of food, but now we need sun light so the water can subside enough so the town can get back on its feet.

“Watching the news this morning of Toowoomba, seeing what happened and that inland tsunami – it was amazing to see that water coming down.

“The biggest thing is not knowing or not being prepared for something like that to come through – that’s probably the biggest drama.

“There are 70-plus people unaccounted for and eight people confirmed dead. That number will increase as the water subsides and they find cars and what not laying everywhere.

“My thoughts go out to everyone. I don’t think I’ve met anyone who has experienced this type of thing before.” 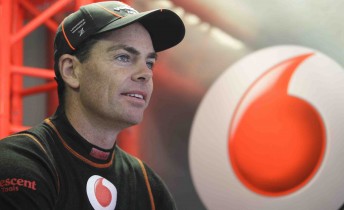 Craig Lowndes drives for TeamVodafone in the V8 Supercars Championship

Lowndes’s V8 team sponsor Vodafone pledged $100,000 to the flood victims during Sunday’s the Nine Network’s flood relief telethon. The company also announced that they would waive all phone bills for those in flood-affected areas.

Lowndes praised Vodafone’s support and encouraged others to donate and help.

“A big company like Vodafone doing their bit is great, but everyone can help too,” he said.

“A lot of friends at home can help at the moment and they’re desperately cleaning out their sheds and homes to donate stuff. Every little bit helps. It’s just a matter of everyone chipping in.

“It’s great to see what Channel 9 did with the appeal. It was tremendous. That itself won’t fix it all, we all need to continue to donate as much or as little as we can.”