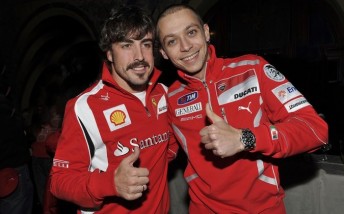 Held every January in the Italian Alps, Wrooom sees key personnel from both the Ducati Corse MotoGP team and the Scuderia Ferrari Marlboro Formula One squad mingle with members of the press in a relaxed ‘ski lodge’ atmosphere.

Rossi, who signed a two year deal with Ducati last August, will attempt to take his eighth premier class title in 2011, after coming out on top three times with Honda and four times with Yamaha in the last decade.

The Italian tested the Desmosedici GP11 in an all-black livery following the 2010 season finale in Valencia, and will help unveil the team’s latest livery tomorrow.

While Rossi ended his first test on the Ducati last November well down the order, the team has insisted that the 31 year old, and his team of ex-Yamaha engineers and mechanics, will require a settling-in period before times are comparable.

The test was also hampered by the shoulder injury that, along with a broken leg, plagued Rossi’s 2010 season.

Having undergone surgery on the shoulder before Christmas, Rossi will have his second taste of the Ducati at MotoGP’s Sepang test, beginning on February 1.

In the meantime, it is expected that Rossi’s shoulder will limit his participation in any physical activity across the coming days of Wrooom 2011.