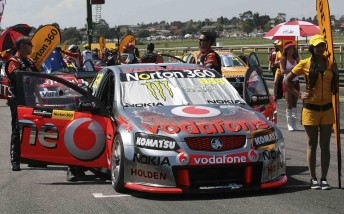 Craig Lowndes on the grid at Sandown last year

Triple Eight Race Engineering is looking closely at entering a car in the Fujitsu V8 Supercars Series this year.

The champion Bathurst team is working through the final details before confirming its place in the second-tier V8 class.

Roland Dane told Speedcafe.com.au that entering the Fujitsu Series is “on his radar.”

Dane was reluctant, though, to talk about potential drivers for the seat. Speedcafe.com.au understands that fast Dane Allan Simonsen and six-time Bathurst champ Mark Skaife are the leading contenders to drive for Triple Eight’s TeamVodafone squad in the endurance races, with Simonsen the likely candidate to race a T8-prepared Fujitsu Series entry.

If Triple Eight decides to enter the class, the team would campaign one of its two original VE Commodores built at the start of last year. T8 has four Commodore chassis in its possession.

Dane says that without the requirement of building new cars over the off-season – a position it has been in over the past two years – has freed up time to look at competing in the development series.

“The Fujitsu Series is getting better. I can see more people doing it,” Dane told Speedcafe.com.au.

“We’ve always been waiting for the right chance to do it, and I think we’re in the right position now. I’m not dead-set on it, but I’m thinking we will (enter).

“It’s certainly in my planning, we have a bit of a way to go before we start being definitive, but it is certainly on my radar.

“As far as drivers go, I haven’t any fixed idea yet, but we are certainly considering running a car.

“Who might drive it depends on money and all of that.”

One of the reasons behind Triple Eight’s desire to compete in the Fujitsu Series is to give his endurance drivers more laps in a V8 Supercar before the Phillip Island and Bathurst events.

The endurance driver rules remain the same as last year where ‘Primary’ drivers must remain in their own cars, forcing teams to pick ‘once-a-year’ stars.

For Triple Eight, the 2010 Season of Endurance was one to remember. Craig Lowndes and Mark Skaife won both the Phillip Island 500 and the Bathurst 1000, while Jamie Whincup and Steve Owen finished second at Bathurst in the famous one-two finish.

Triple Eight will launch its new TeamVodafone colour scheme and (potentially) its endurance driver line-up before the Eastern Creek V8 test on January 29.

The Fujitsu V8 Supercars Series will kick off at the Clipsal 500 in Adelaide on March 24-26.