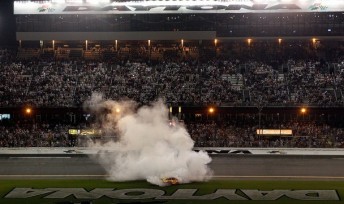 The addition of past Rookie of the Year winners into the field is set to spice up NASCAR’s season-opening Budweiser Shootout at Daytona.

According to an official list released by NASCAR, 30 drivers will be eligible to enter the 75 lap non-points race on February 12.

To race in the event, drivers must have either qualified for the 2010 Chase for the Sprint Cup, previously won the Sprint Cup, Budweiser Shootout or a Daytona Sprint Cup points race, or taken the Rookie of the Year honours in the last 10 seasons.

The addition of the Rookie of the Year winners for 2011 sees Juan Pablo Montoya, Regan Smith, Joey Logano and Kevin Conway eligible for the first time.

Robin Pemberton, vice president of competition for NASCAR, says the former rookies will add to the spectacle of the event.

“When you take a look at the field for this year’s Budweiser Shootout at Daytona, it’s loaded with all-star caliber drivers,” said Pemberton.

“From former series champions and Chase drivers, to the past 10 rookie of the year performers, to drivers who have had success at Daytona, we believe the fans are in store for a terrific and highly competitive event on a brand new racing surface.”

The entire Daytona circuit has been resurfaced since the Sprint Cup last visited the venue.

Several drivers took part in a tyre test last December on the new surface, and reported minimal tyre wear in comparison to previous years – potentially changing the makeup of the famous race.

No driver has won the Shootout and the 500 in the same year since Jeff Gordon in 1997.

See below for a full list of drivers eligible for the 2011 Budweiser Shootout, as well as NASCAR’s official promotional video for the race