Phil Munnerley to line up with Tony Kart team

Phil Munnerley to line up with Tony Kart team 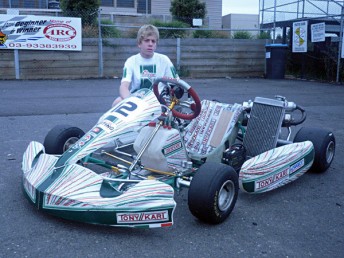 Philip Munnerley will make the step up to Pro Junior (KF3) in the 2011 CIK Stars of Karting Series.

The 15 year-old will drive for last year’s winners of the Trans-West Manufacturer Challenge, Tony Kart Australia.

Munnerley will be joined in the iconic Tony Kart green by the Smith brothers, who finished equal third in last year’s Pro Light (KF1) championship, and Aidan Wright who is this year making the move into the senior ranks.

The Victorian, who finished runner-up in Junior National Light at last year’s AKA Nationals, and was a podium finisher in the East Coast Junior National Title last year, says he is looking forward to hitting the track for the the first round of the series in February at Ipswich.

“In the past the CIK series has always produced the best drivers and the new-look Stars of Karting Series is a very professional championship which I was amazed to be a part of while racing in the East Coast Title last year, I’m very excited to be able to step up into the Pro Junior ranks this year,” said Munnerley.

“Securing a drive in the Tony Kart Team is a great opportunity, I have been doing a lot of testing an everything is going to plan. I’m looking forward to working with the team to achieve some good results this year”.

The young gun will be one to look out for in 2011 aboard his Tony Kart, and has already got his sights set on the Pro Junior title with a plan of gaining as much experience as possible before possibly embarking on several overseas events during 2012.

“Competing in the CIK Stars of Karting Series is going to be a great challenge, I’ll be focusing on achieving the best results I can this year, this will allow us to follow plans of competing in some races overseas in 2012,” said Munnerley.

The 2011 CIK Stars of Karting Series kicks off at Ipswich in Queensland on the final weekend in February (Feb 26/27).