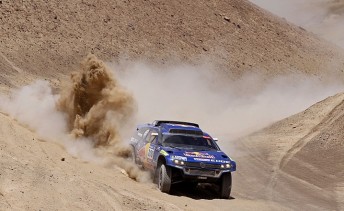 BMW star Stephane Peterhansel has conceded that a 10th Dakar Rally win is now beyond reach after more troubles beset the Frenchman on Stage 7.

Volkswagen duo Nasser Al-Attiyah and Carlos Sainz continued their battle for the overall lead by dominating the stage.

The first day of the second week of the 2011 Dakar saw competitors travel from the northern-most point of the rally in Arica, down to Antofagasta.

While the scheduled 611km Special Stage was reduced to 250km by rally orgnaisers, it took just 15km before Peterhansel struck trouble. Yet another puncture proved an early setback, and shook the confidence of the Monster X3 pilot, who later described the tyre issue as his own fault.

“That was just what we needed to lose confidence for the rest of the stage.

“I don’t have the right speed to drive through this kind of rocky fesh fesh. Minutes add up and it’s getting pretty bad.

“It is my fault. I drive too fast on this terrain. I don’t have the right pace.

“Anyway, on the podium, 2nd, 3rd, 4th, 5th or 8th, it’s all the same. The only thing we wanted at the start was final victory and that seems to be getting out of reach… for sure.”

Sainz inturn had his lead over team-mate Nasser Al-Attiyah cut in half to just 90 seconds after the Qatari won Stage 7.

The two Volkswagens finished the stage in close proximity, after Al-Attiyah caught but elected against attempting to pass Sainz in the dust.

With Volkswagen team boss Kriss Nissen insisting team orders will not be applied, the rally appears set for an intense finish, even without a challenge from BMW.

The Volkswagen team’s third entry, with South African Giniel de Villiers at the wheel, came home third in the stage, maintaining his fourth place in the overall standings.

The remainder of the BMW X-Raid team faired little better than Peterhansel, after Guerlain Chicherit embarrassingly destroyed the team’s MINI in a roll-over while running the car for German TV cameras on yesterday’s rest day.

Team-mate Orlando Terranova faired little better, somersaulting his way out of the rally during Stage 7 after his BMW made contact with a large rock. The Argentinean had looked set to enter the top five at the completion of the stage, due to fellow BMW driver Krzysztof Holowcyc being struck down by two punctures.

Chilean hero Francisco Lopez took his first stage win of the 2011 Dakar on his 450cc Aprillia.

The result marked the third day in a row that KTM’s overall leaders Marc Coma and Cyril Despres failed to win the stage.

Lopez, who is third in the overall standings less than 19 minutes behind Coma, was thankful that the stage had been shortened after losing part of his exhaust during the stage.

“It was not easy,” said Lopez at the completion of the 250km special.

“There was a lot of dust in the beginning. I went a little faster afterwards but I lost my exhaust at mid stage more or less.

“So after that, I was afraid my engine would break. Fortunately, it was the shortest special stage since the beginning of the raid; if it had not been the engine would have been hit bad.”

Despres finshed second on the stage to take 90 seconds out of Coma’s lead – reducing the gap between the pair to under seven and a half minutes.

Portugal’s Helder Rodriques took fourth on the stage and is currently fourth in the overall standings. The Yamaha rider had earlier been awarded the Stage 6 victory, after initial winner Ruben Faria was adjudged to have spent less than the mandatory time at one of the refueling points.

Faria was fifth on Stage 7, and sists fifth overall – 40 minutes down on Coma.

It was a difficult day for former front-runner Jonah Street, with the American stranded in the stage due to ignition problems.

The result sees Smith move into 29th in the overall standings – six hours behind rally leader Coma. Pavey also gained positions on the stage to be 64th.

Tomororw will see competitors travel across the Chiliean desert from Antofagasta to Copiapo. The day will feature a 508km Special Stage that is expected to test the navigational aptitude of competitors.