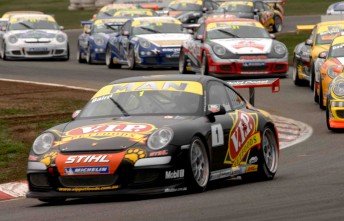 It will be the first time that the cars have the opportunity to hit the race track, with delivery of the 22 new 2011-spec 997s from Germany expected in a couple of days.

Before the test, the teams and drivers will go through a two-day training course at Porsche Australia’s base at Tullamarine on January 27/28 before conducting the full test at Winton on Sunday January 30.

A technician from Porsche’s base in Weissach, Germany, will be on hand to run each team through the new machines.

While the test day is not compulsory for competitors, Porsche Australia’s Motorsport manager Jamey Blaikie expects 20 of the race cars to run at the test. “The cars will get delivered into the country in the next few days,” Blaikie confirmed to Speedcafe.com.au.

“When they get cleared by customs, Motec will go out and install the camera systems in the cars, upgrade the dash.

“The test will be a good opportunity for everyone to have a shakedown.

“We’ve got a brand-new tyre this year from Michelin. They are in production now and will be air freighted from France so they’ll be there in time for the test. It will give everyone a chance to run on the new tyre and get used to it.

“We’ll also have a technician here from Germany on the day.

“It’s not a compulsory day – some guys might elect not to use it, but it is totally up to them. The cars are basically race ready. You’ve got to put stickers on them, fuel them up, wire them up and you’re done.”

Smollen, a former Australian GT competitor, announced this morning that Porsche specialists Autohaus Hamilton will enter him in the new series.

In terms of teams running and maintaining cars, McElrea Motorsport will run as many as three cars, with drivers to be confirmed in the coming weeks.

Also, 2011 series favourite Baird has been appointed by Porsche as its official ambassador. His role at the test day will be to assist any of the teams or drivers with car and set-up issues.

After the official Winton test, the 2011 Australian Carrera Cup Championship kicks off at the Australian Grand Prix on March 24-27.