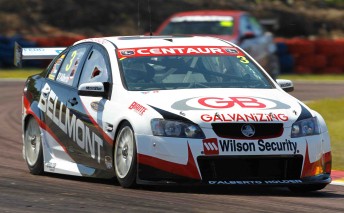 The single-car Victorian-based team will be known as Wilson Security Racing for the new V8 season.

While not confirmed at this point, D’Alberto will campaign an ex-Ford Performance Racing Ford Falcon FG this year, switching from the team’s loyal association with Holden and Walkinshaw Racing equipment.

D’Alberto will, however, use his current Holden Commodore VE at V8 Supercars’ official test at Eastern Creek (January 29) and the first event of the championship at Abu Dhabi (February 11-12). The official livery of the Wilson-backed car will not be seen until the second event of the series at the Clipsal 500 in Adelaide.

D’Alberto, who finished 20th in last year’s V8 series, says that securing Wilson Security as his team’s first major sponsor is a massive coup of his small team.

“Wilson Security has proven to be a fantastic supporter of Australian motor racing, especially in V8 Supercars, and I’m looking forward to driving the Wilson Security entry in 2011,” said D’Alberto.

“They (Wilson Security) are very big on backing emerging drivers, the young guys coming through the pack. This will be our second season with our own team, so we see ourselves as a growing operation with a view to building success and it’s good to have Wilson Security join us as a key partner in doing that.”

“Wilson Security has become a strong brand in V8 Supercars and they recognise our commitment to be up amongst the leading cars,” he said.

“The backing from Wilson Security endorses our progress in 2010 and like us they want to see more success in 2011.”

“We have always sponsored emerging teams or drivers and it’s been pleasing for us to see them progress,” McMellan said.

“With this opportunity we believe we have both an emerging team and driver.

“There are some exciting plans in place for 2011 that will see the operations of Wilson Security Racing expand and improve in performance and we look forward to seeing this season unfold.”