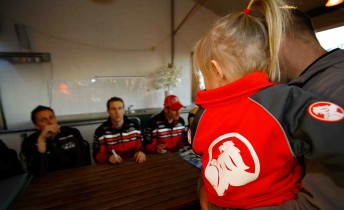 V8 Supercars CEO Martin Whitaker believes that the category’s focus on attracting a younger demographic will help it secure more car manufacturer involvement in the future.

V8 Supercars has gone to great lengths to improve its off-track entertainment package in recent years, with its ‘Rock and Race’ format being rolled out at several marquee events alongside dedicated ‘family zones’.

Whitaker points to the introduction of more consumer brands to the series, which now includes Vodafone, Mother Energy Drink and Pepsi Max as evidence that the V8 Supercars audience is one of the youngest in world motorsport.

“We’ve got a much younger, family-oriented audience watching V8 Supercars than perhaps watching, for example, the World Touring Car Championship or NASCAR at this moment in time,” Whitaker told Speedcafe.com.au.

“That’s a very positive story for us, and that links into why we have more and more consumer brands coming into the sport.

“I think that’s very encouraging, and makes us more relevant to the ‘high street.’”

With Ford and Holden both reducing their financial involvement in the sport in recent years, the championship is working hard to ensure that at least one new maker joins the series when its Car of the Future hits the track next year.

“It’s early days at the moment, but that’s what we’re working on,” said Whitaker when asked about the link between demographics and car manufacturers.

“All these manufacturers aren’t stupid, they know exactly what’s good for them, and they can see that V8 Supercars does deliver an incredible amount.

“Make no bones about it, their promotion and their advertising is aimed at the younger sector of the market, and I think that’s good news for us.

“We look forward to working with manufacturers in the future, whether it’s Ford and Holden, or other manufacturers that are interested in becoming involved.”