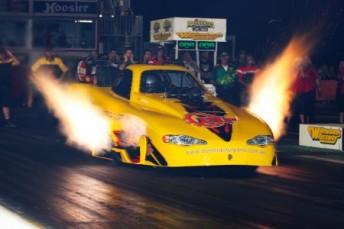 Willowbank Raceway has announced the cancellation of next week’s round two of the New Year Series, citing the state of the Raceway following Queensland’s extreme weather of the past month, plus the serious weather forecasts for the coming seven days, as deciding factors.

The event was scheduled for Friday the 14th and Saturday the 15th of January and was set to host Nitro Funny Car racing alongside ANDRA Pro Series racing from the categories of Top Doorslammer and Pro Stock.

Willowbank Raceway Managing Director Steve Bettes said the decision had been made with the best interests of the competitors, spectators and officials in mind and after extensive consultation with weather forecast providers.

“Over the past month the state of Queensland has been hit hard, with news programs estimating that 200,000 Queenslanders have been affected by flooding.

“In the surrounding areas, roads continue to be cut and rivers flooded, with many competitors unable to make it to Round One of the New Year Series due to floods in their home towns.

“It is likely that if the event were to continue next weekend, many competitors vying for results in the ANDRA Pro Series and Rocket Allstars Series would be unable to compete and therefore disadvantaged through no fault of their own.

“The Raceway’s grounds are sodden from the previous weeks of rain, and the risk of damage to the facility is high.

“With the forecasted extreme weather to come over the next seven days, I can only see the situation in our local area worsening.

“The Management Committee resolved to make this decision one week out from our start date in an attempt to lessen the impact on our racers – with many travelling from across the country – and our officials and spectators.

“Hopefully, those planning to travel will be able at this stage to recover travel costs, minimising the financial impact upon themselves, something which would not be possible if this decision was left closer to the Event start.

“It is with sadness that this decision has been made, but we believe it to be the right one.”

Fans who have pre-purchased tickets to Round Two will be automatically refunded, please send any enquiries to [email protected].  For more information please visit www.willowbankraceway.com.au