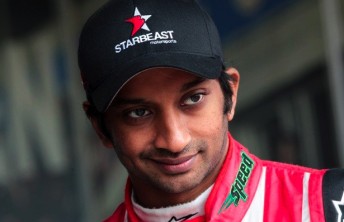 India’s first Formula One driver Narain Karthikeyan will make a return to the pinnacle of world motorsport this year as a driver for the HRT F1 Team.

Karthikeyan, who completed a single season with Jordan in 2005, announced his signing with the team via Twitter and the Indian media yesterday. Confirmation from the team is expected later today.

The 33 year old has experienced a variety of racing categories since his two-year stint as Williams test driver came to an end in 2007.

Karthikeyan has raced in A1GP and Superleague Formula, as well as competing several times in the NASCAR Camping World Truck Series.

The move to HRT also sees a reunion with team principal Colin Kolles, after the Indian drove for Kolles’s Audi R10 team in the 2009 Le Mans Series.

Oddly, Karthikeyan could not take the wheel during the Le Mans 24 Hours race that year, thanks to dislocating his shoulder while attempting to jump over the pitwall pre-race.

Karthikeyan told The Times of India yesterday that he had always planned on returning to Formula One.

“I have always maintained that I have not given up on my desire to return to the top level of motorsport.

“I am confident that I have the pace, the fitness and the will to succeed in Formula 1. I am extremely grateful to the Tata Group, without whose unwavering support this comeback would not have been possible.

“I’m looking forward to racing for HRT and to working again with Dr Colin Kolles. We have a long standing and excellent working relationship together.”

The inaugural Indian Grand Prix will take place on October 30 this year.

HRT are planning to campaign a Geoff Willis-designed car in 2011, complete with Williams gearbox and back end.

It is believed that the team’s yet to be announced second driver will also need to bring financial backing.