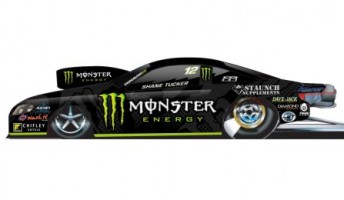 The team confirmed that the popular energy drink company will support Tucker’s efforts in Pro Stock this season.

“The opportunity to have Monster Energy on board is huge, not only for our team but the entire sport,” said Tucker.

“Monster Energy is a fantastic fit, adding them as an integral part of our racing efforts will bring a whole new dynamic to the team for sure. We have been working very hard to get our team’s performance back to the top of the heap this season and now with arguably the world’s most recognized energy drink onboard, the forecast for the 2011 season looks extremely exciting.”

Monster’s association with RTR is the next phase of the company’s involvement in Australian motorsport. Monster already supports a number of drivers and teams including Jamie Whincup, Chaz Mostert and Paul Morris Motorsport.

Monster Energy Sponsorship Manager Dave Ellis said that it was only a “matter of timing” before Monster Energy got seriously into drag racing.

“Monster Energy is very excited to become the naming rights sponsor of Shane and the Rob Tucker Racing team,” he said.

“Since meeting Shane almost 12 months ago when Monster was launched in Australia, we have always felt that it was only going to be a matter of timing as to when we would get involved in what we feel is a very professional operation, and one we feel will be very competitive on the National Drag Racing Pro Series.

“Shane has been very professional in doing up the whole deal for 2011 and we are looking forward to a very exciting year in racing.

“It gives us great pleasure to be able to support another young guy live his dream as well as getting another professional team to the line. We wish Shane and the rest of the series drivers a safe 2011 session.”

Tucker’s new Monster-liveried car would have broken cover for the first time at the Castrol New Year Series on January 14-15, but the meeting was recently cancelled due to inclement Queensland weather.