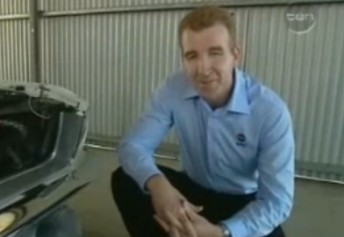 Mark Oastler was one of the most popular and admired commentators in pit lane. Not only was he involved in the broadcast of V8s, he was a regular on RPM and other motorsport shows like Trackside and V8 Superstars.

Motorsport became a passion for Oastler at primary school when he used to watch Bathurst with his family. A fan of the sport, he followed the Australian Touring Car Championship closely until his mid-20s when he decided to turn his passion into a career. He enrolled to do a Journalism Degree (at Charles Sturt University in Bathurst of all places) and soon found himself filling in for Neil Crompton.

“I read that Neil Crompton was going to race F3 in England and as my brother was working at Reynard I thought OK this could be a chance to get in touch with Neil, let him know what I’m doing and let him know that I am interested in one day being a TV commentator,” Oastler explained to Speedcafe.com.au.

“When Neil got back to Australia we had a chat. My timing was perfect because he was trying to concentrate on his racing more than his TV commitments and Channel Seven was looking around for a commentator to fill his seat.

“One thing lead to another and I was given a shot.”

Oastler truly had a baptism of fire. He made his debut at Amaroo Park Raceway in 1990 and immediately impressed. He was asked to go to Bathurst and be a part of that year’s ‘Great Race’.

“I was nervous as hell but Mike Raymond gave me a crack (at Amaroo),” said Oastler.

“All I wanted to do was to hang around at the back of the Channel Seven compound to see how it worked, I had no intention of them sticking a set of cans (headphones) on me to see how I would go, but that’s exactly what happened.

“These opportunities come up in life and you have to grab them.

“So I went to Bathurst in 1990, commentated on the race and they kept asking me back.

“It worked out really well, it took the pressure off Neil, he could concentrate on his racing and it gave me the opportunity to get a job in the media.

“It was bizarre to come in at such a high level, but that’s how it worked.”

Oastler spent seven years with Channel Seven and then another six with Network 10. With Australian motorsport going through a revolution in the late 1990s Oastler’s favourite memory from his career comes from his Bathurst debut.

“That first Bathurst (in 1990) was something else,” said Oastler.

“I came from total obscurity to being with this commentary team that I’d listened to for decades.

“I was thrust into it and I thought “hang on, I’m commentating at Bathurst on Channel Seven!” That was a huge shock and a pivotal moment in my career, from there everything came together.”

One of Oastler’s proudest moments came from Channel 10’s debut year as V8 broadcaster in 1997.

“When Seven lost the rights in 1996, I thought, “oh well that’s the end for me,” but Channel Ten wanted me to be a part of this new thing,” said Oastler.

“I went over to Ten in 1997, there was a very new team; myself, Leigh Diffey, Barry Sheene and Billy Woods, we were the core presenting group.

“There was so much doubt in the industry that Ten could do it, they said that they wouldn’t know how to do motorsport, they won’t cut it, and in the end we just silenced all the critics. It went really well.

“They said we’d done the championship OK but we don’t know how to do Bathurst. We did it.

“At the end of the year we could say “Wow, we did it!” There was a lot of pressure from upstairs (management). To get through and do it successfully was enormously satisfying.”

“The one that sticks out is Oran Park, when (Paul) Morris stalled on the grid and (Mark) Larkham hit him, with it exploding into flames,” said Oastler.

“When you are confronted with that sort of stuff on live TV it’s very difficult because you need to choose your words very carefully.

“The big accidents, like the Lowndes roll over at Calder Park (in 1999), you remember them all because you are really on the spot when you are live – everyone is listening.

“Another one I remember was Glenn Seton’s car packing up at Bathurst in 1995. He was seven or eight laps from winning and there he was on Racecam, just parked at the side of the road.

“You could see how shattered he was, that moment is just suspended in time for me. What do you say to a guy in that situation?”

Oastler loves the immediacy of live TV and the buzz that goes along with it, but when the time came to give it all up he walked away happily, proud of his accomplishments.

“I don’t miss it, I was commentating non-stop for 13 years” said Oastler.

“It was very clear to me that I was stepping in to fill in for Neil, so he could race. In my mind I was only keeping the seat warm until he wanted to come back.

“It was time for me to move on, when I walked away I was quite happy. I don’t miss it, but equally I look back on it as a fantastic time in my career and one I was very proud off.”

Oastler left the bright lights of television in 2002 to start up a new publication. Australian Muscle Cars is one of the most popular car magazines on the market and one that he has been associated with for almost 10 years.

“The magazine started to evolve before I started to move away from V8 commentary,” said Oastler.

“I started to lose interest in V8s but I always had a fascination with the history of the sport.

“The natural evolution for my career would be to do something to indulge in the history.

“The idea for this magazine had been mulling in my head for a while. I went to Chevron Publishing and it’s been powering along nicely ever since.

“It is a full time job; the level of research required is massive. You just have to have an unwavering commitment to make sure you’ve covered everything so that you do the magazine justice.

“I really enjoy it and have the passion to make sure it’s done right.”

When the subject of the quality of the coverage of V8 Supercars is inadvertently raised, Oastler laughs at the criticism.

“One of the funniest things I’ve discovered doing Australian  Muscle Car magazine is that through all the research of all the old magazines of the 1960s and 70s, even back then, the endless letters of complaint about the TV coverage,” said Oastler.

“You look at the 70s, everyone is complaining, same for the 80s and the 90s. If you’re to be a broadcaster of sport, any sport, you have to accept that you won’t keep people happy all the time.”

As a true motorsport fan Oastler loves the depth of coverage in Australia and thinks the current broadcaster is doing just fine.

“I think that what Seven does, like Channel 10 did before them, is outstanding,” said Oastler.

“The quality is world class and the people might want to throw darts at the TV complaining about this and that, but honestly, it is so good.

“Having grown up with black and white, where the only motorsport on telly was Bathurst, these days you’ve got more motorsport than you know what to do with and people are still complaining.

“It’s a hard game so you have to have a thick skin, when I was at Channel 10 you copped criticism about everything you did, it comes with the territory.”

With the next edition of Australian Muscle Magazine about to hit newsstands, Oastler made the surprise announcement just after Christmas that it would be his last as Editor.

“What’s next for me?” asked Oastler.

“Well, we’re moving to Melbourne soon and once settled I want to tackle a couple of media projects.

“In the meantime, I’m officially back on the freelance journo market.

“I feel incredibly fortunate. Motorsport has been a hobby and a passion for me my whole life.

“To be able to indulge in your passion as a career, I think that’s just the ultimate. I lead the ultimate life.”