BMW double on the Dakar

BMW double on the Dakar 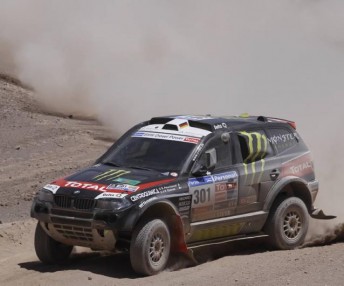 BMW has scored a unique double on the Personal Dakar Argentina Chile, winning both the car and bike legs of the 423-kilometre fifth stage Calama to Iquique in Chile. Overall it continues to be Carlos Sainz in a Volkswagen Touareg in the auto division while fellow Spaniard Marc Coma (KTM) heads the moto division.

The first dunes of the rally gave Stephane Peterhansel an idea of what could be possible on the terrain of choice. Taking advantage of a navigation mistake by both of his rivals, Carlos Sainz and Nasser Al-Attiyah, the Frenchman started to open up a gap over a long section which he covered alone in the lead, obtaining a lead of 2:45 at the midway point. However, the BMW driver was nearly caught at the final control point not long before the finish due to a puncture. He then put his head down reaching the finish line with a lead of 1:24 over Al-Attiyah and 3:15 over Sainz.

The Spaniard, who made the most of the Argentinean stages holds on to the lead in the general standings, 2:26 ahead of Peterhansel. With this first victory in 2011 for the X-Raid team, the BMW X3 also climbs up a rung on the ladder to second overall ahead of Al-Attiyah.

“It was a stage with lots of surprises,” said Peterhansel.

“At the finish, we put in a good time. It could have been better, though. At one point, I had regained four minutes on Carlos. In the end, our performance was okay.

“The first three places in the general standings are separated by three minutes. That’s good. I hope it stays like that until the rest day, that way we’ll have a thrilling end to the race. Everything is still possible for us”.

Giniel De Villiers (VW) was fourth and is still in with a shot for a place on the final podium. MINI’s Guerlain Chicherit had a challenging day when he got stuck in a rut on what seemed a rather safe manoeuvre. His X-Raid team-mate, Leal Dos Santos, lent help to extract him from this sticky situation, but Chicherit and Périn struggled up to the stage finish, trailing their team leader by 30 minutes.

In the truck race, Vladimir Chagin seemed to have some sort of hangover from his birthday. After his third success yesterday, the title holder lost more than 20 minutes on the day’s special and lost his lead in the general standings to his Kamaz team-mate, Firdaus Kabirov, who picked up his second special victory since the start of this edition of the Dakar. The Russian two times winner (in 2005 and 2009) now possesses a lead of 13 minutes over Chagin and 25 minutes over Ales Loprais in his Tatra.

Paulo Gonçalves heading into the stage finish and the seaside Bivouac. Pic: DPPI

Francisco Lopez has made a habit of winning at least one stage at home since the Dakar has been hosted by his country. Last year, “Chaleco” missed out on this prestigious stage due to a navigational mistake. This time, after a faultless performance all along the 423 km of the Day’s special, the Chilean fans’ favourite offered himself a royal descent down to the now famous finish at Iquique. Success seemed to be on the side of Lopez, because when it came to totting up, he appeared to have won the stage by one second from Frans Verhoeven.

However, Paulo Gonçalves benefited from a correction of his time after stopping to assist fallen rider Olivier Pain with Coma. It gave the Portuguese rider his first special stage win and the first victory for BMW on the Dakar since the era of Richard Sainct, who triumphed on a German-made bike in 1999 and 2000.

“I think I rode it well. After the refuelling point, I stopped to help Olivier Pain who had fallen. The rules say we should stop. I waited for 4 to 5 minutes. The main thing is that he’s ok. The bike worked well on the quick parts as well as the technical ones”.

Pain, who had just put in the best provisional time after 218 km, crashed at the 231 km point. With a broken wrist, the Yamaha rider was airlifted by the medical helicopter from the race route. The accident had a knock-on effect on the positions gained in Iquique. Marc Coma fell at the start of the special (after 80 km) stopped and gave up some time, like Gonçalves, to help Olivier Pain. Provisionally second in the general standings, the Spaniard benefitted from a correction to his result, enabling him to retain his position as leader 10:14 ahead of Cyril Despres. The title holder received a ten minute penalty late yesterday due to a lack of attention to the starting procedures on stage 4; the differences gained on the track are minimal between the two favourites.

The name of Patronelli has reappeared at the top of the quad general standings. After the withdrawal of Marcos, the winner in 2010, his older brother Alejandro grabbed a stage victory that enabled him to regain the lead in the event. His countryman Thomas Maffei, second today, trails him by just under 90-seconds. 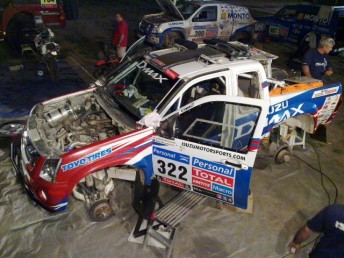 A long hard day for the Australians headed by the Isuzu D-MAX team of Bruce Garland and Harry Suzuki. Despite slipping back to 22nd from 19th place they say they are among the lucky ones to make it through.

“There’s absolute carnage out there – a lot of people just won’t be continuing after what we went through today,” said Garland.

“This was the first day the trucks ran with the cars and it’s just like a tornado when they come through. They stir up the dust and you can’t see anything – we missed a waypoint reference in the dust [crews must be registered passing these ‘checkpoints’ or be disqualified] and lost time searching for it. And if you’re unlucky enough to break down and you don’t get way off the track, you can get run over because no-one can see you.”

The Isuzu D-MAX ute suffered steering problems in the stage, which the crew managed to fix, then 30km from the end they landed very heavily off a sanddune and Garland damaged his back.

“I’m sore, very sore, but I’m sure it’s nothing that some painkillers and a teaspoon of cement won’t fix! I’ve had hard landings before – plenty of them – but nothing quite like that one.

“It was just really, really rough out there – absolute car-breaking stuff. Badly eroded with big chunks of rock and huge wash-outs, so you just bounced from rock to rock. I know what the road to hell looks like because I have just driven it! There were broken cars and bikes everywhere.”

While Garland completed the stage, as of time of writing the only other Aussie car entry of Geoffrey Olholm and Steve Riley (BMW) are yet to check-in at the Bivouac.

On two wheels a better day for Jacob Smith finishing the stage 41st to be 33rd overall. Simon Pavey hit back to be 79th, while Warren Strange is 83rd. Mark Davidson has withdrawn from the event.

Leg 6 includes 456-kilometres of timed running from Iquique to Arica. The exploration of the Atacama Desert this year brings the Dakar participants to Arica, the last town before the Peruvian border. For this large slice of desert before the rest day, the menu is full of dunes, whose sizes increase as the day passes by. But throughout the special stage, the riders and drivers will experience an alternation of sensations. After surfing on the dunes, most of them will get to grips with the unavoidable zones of fesh-fesh, or “guadal” as they are known in this part of the world. For the section of slaloming between dust and dry grass, patience is the competitors’ best ally.