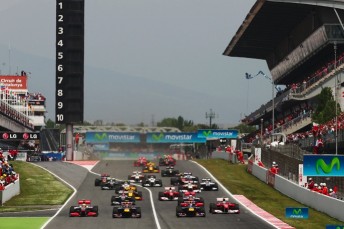 The second HRT slot is still to be filled, with several drivers including 2010 HRT pilots Karun Chandhok, Christian Klien, Bruno Senna and Sakon Yamamoto reportedly working on finding the required budget to compete.

The new season will see no changes to the driver line-ups of the sport’s top five teams, with Red Bull, McLaren, Ferrari, Mercedes and Renault all electing to retain their 2010 drivers.

The 2011 grid will be one of the most culturally diverse in years, with at least 13 nationalities being represented.

Germany again leads the way with five drivers, from Great Britain with three.

Perez’s signing means a Mexican will join the field for the first time since Hector Rebaque competed with Brabham in 1981, while Maldonado will become the first Venezuelan in Formula One since Johnny Cecotto competed with Theodore in 1984.

D’Ambrosio will also end a considerable driver-drought for Belgium, with the country not represented since Bertrand Gachot’s 1995 campaign for Pacific Grand Prix.

Of those who competed in the final race of 2010, Nico Hulkenberg, Tonio Liuzzi, Nick Heidfeld, Lucas di Grassi, Bruno Senna and Chistian Klien are all yet to secure a drive.

It is expected that Hulkenberg will take on the reserve driver role at Force India, while Tonio Liuzzi has a contract to race with Force India – a situation which the team is yet to resolve.

The 2011 Formula One World Championship kicks off in Bahrain on March 13.