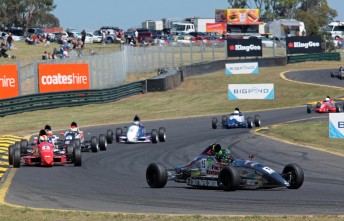 The Australian Formula Ford Championship has finalised its 2011 calendar, with two of its eight rounds to be run on the Shannons Nationals program.

The Formula Ford title – regarded as Australia’s nursery for future champions – will visit Eastern Creek and Sandown with the Shannons Nationals Motor Racing Championships, adding to Formula Ford’s six other rounds with the V8 Supercars Championship.

Formula Ford’s return to Eastern Creek will be the first time that the class has competed in New South Wales since 2008.

The finalised calendar will see the season start at the Clipsal 500 in March and end at Symmons Plains in November, while the Shannons National rounds at Eastern Creek and Sandown fit into the middle of the year as Rounds 3 and 5 respectively.

Category manager Margaret Hardy is pleased with the changed calendar.

“It’s a big boost for Formula Ford to have the opportunity to return to NSW for the first time since the final round of 2008 and I know all of our NSW drivers are looking forward to having a home event again,” Hardy said.

“The Sandown event fits nicely into our calendar as a popular venue, but it’s also a boost for interstate competitors who will only have to make one trip to Victoria for Sandown and Phillip Island, which are just one week apart.

“We’ve got a great range of circuits this season and we’re looking forward to working with the Shannons Nationals and also V8 Supercars in 2011 to make this season one of the best yet.”