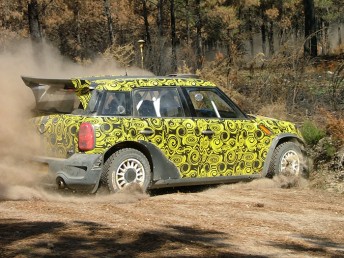 Dani Sordo will drive for MINI in the WRC

Dani Sordo has confirmed his switch from Citroen to the all-new MINI in the World Rally Championship.

The Spaniard has scored 29 podium finishes in the WRC, but has yet to win an event. This has been mainly due to the fact that he has been the teammate of Sebastien Loeb and acted as a faithful number #2. Citroen also recently confirmed that young gun Sebastien Ogier would be promoted to the main factory squad with Sordo offered a spot in the Junior team.

Sordo had been linked to a Ford drive, but despite MINI only running a limited program in 2011, as it prepares for a full assault in 2012, the 27-year-old saw the drive with the Prodrive squad as the best opportunity long-term.

The deal is for two years aboard the new Countryman S WRC built to the new 2011 regulations. Rule changes include the reduction in engine capacity from 2-litres to 1600cc, but still retains turbo-charging and all-wheel-drive.

The Spaniard joined Irishman and now team-mate Kris Meeke for a test session in Sardinia in November. This test went a long way to convincing the Spaniard of the potential of the MINI.

“There has been a great deal of excitement surrounding MINI’s return to the WRC, so to be part of this new team is a fantastic opportunity for me,” said Sordo.

“I’m sure MINI has a big future in the sport. I’m looking forward to working with Kris Meeke, having completed a very successful test with him in Sardinia last November.”

Prodrive Director David Richards believes Sordo’s experience will be a major plus to the MINI operation.

“Dani may only be 27, but he is already one of the most experienced drivers in the WRC and has been competing at the very highest level for the last five years,” Richards said.

“I believe with the new Mini WRC and in the right environment, he can now take the next step and add to his 29 podiums with victories on WRC events and become a challenger for a WRC title.”

MINI is expected to compete in at least six events in the 2011 WRC, most likely beginning with Rally Sardinia in May. It would be unlikely that MINI will compete at Rally Australia in Coffs Harbour in September, with the team concentrating on European based rallies for 2011.