Carlos Sainz hits back on the Dakar

Carlos Sainz hits back on the Dakar Carlos Sainz won his third stage of the 2011 Dakar

Carlos Sainz has taken his third stage win of four to head the car section, while Marc Coma has the lead from Cyril Despres in the bikes after the San Salvador de Jujuy (Argentina) to Calama (Chile) 207-kilometre stage of the Personal Dakar Argentina Chile.

The race is looking eventful in the car category, even if Carlos Sainz’s stock has risen slightly on arrival in Calama. For the moment, the battle for the title mainly concerns the Race Touareg of Nasser Al-Attiyah (yesterday’s winner) and Sainz, with the promise of seeing Stephane Peterhansel display his skills in sand as soon as the long stretches of dunes appear. The Frenchman even seemed to be getting a head-start, since the BMW X3 driver passed through the 81-kilometre point with the best time: 15-seconds better than Sainz.

In the second part, the leader of the X-Raid team did not really make any mistakes, but a puncture held him up by nearly three minutes, surely robbing him of the best time at the finishing line. As a result, “El Matador” Sainz grabbed his 20th stage victory on the Dakar, allowing him to close in on the 22 that Peterhansel has picked up in his career in a car.

“There was some navigation work, a bit of off-track driving, but I think that it will be tomorrow when things will get serious,” said Sainz.

“I drove very fast today. I hope that someone was quicker then me, so that I don’t have to open the way. Peterhansel, Al Attiyah and even De Viliers are dangerous rivals. We’re very close to each other in the standings”.

In the general standings, the trio of Sainz, Al Attiyah and Peterhansel are within a range of 5:40, whilst the VW of De Villiers is eying from a distance any places to be snatched on the podium – the South African is fourth, 19:14 behind. This is the place that Robby Gordon accomplished in 2009, but he will not be able to do so this year. Halted by a major mechanical problem after crossing the Paso de Jama pass, the Hummer was not able to start the day’s special. This is the first time since the 2006 edition that the American has been forced to withdraw.

With more than an hour to be made up on Sainz, Mark Miller also has little hope of being concerned by the title, though he did put himself into fifth position today, with a lead of more than two minutes over Orlando Terranova and Guerlain Chicherit. The MINI Countryman driver, sickened by his overheating problems on the first day, seems to be regaining some sort of stability.

The truck race was once again dominated by the master of the discipline. Vladimir Chagin gave himself the birthday present of a second consecutive triumph, his third victory since the beginning of this edition of the Dakar, meaning Kamaz has picked up all the stage wins so far on this Dakar. Chagin today beat his team-mate Firdaus Kabirov by more than 2 minutes. Ales Loprais (Tatra) in spite of a flat tyre in the last few kilometres of the special, finished in third. In the general standings, the Tsar Chagin increases his lead, which now stands at 8:41 over Kabirov. 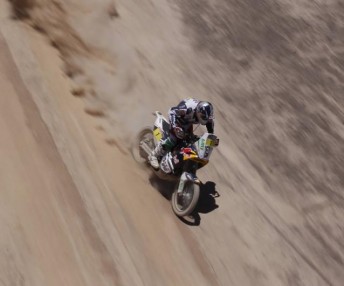 Marc Coma is leading the bikes

The battle in the bikes is quickly turning into a classic between Cyril Despres and Marc Coma. After crossing the Andes and altitude of 4,800-metres, the Spaniard showed his expertise in navigation in addition to his skill behind the handlebars. Over 200 kilometres of the route, he started by distancing Despres by 32-seconds after 81-kilometres, then by the finish he was 16-seconds quicker than his main rival. The provisional outcome shows the extent to which the two masters of the discipline can manage to neutralise each other.

“It was difficult to open the way. I’m happy and I felt great. I hope it stays like that right until the end. The general standings don’t matter for the moment. The most important thing will be the last day.

“It’s essential to have a good pace and avoid making mistakes. Now we’ll have to deal with two very difficult stages”.

After 1,220 km of timed sections so far, Coma appeared to hold a slim gap of two-seconds, whilst both men have two stage victories each. However, officials imposed a 10-minute penalty on Despres, but he still remains in second overall.

Behind them, “Chaleco” Lopez would surely have liked to enter Chile as a winner, just like he did the first time the Dakar visited his country. However, his starting position (11th) made it a difficult task. In total, he still managed to grab the third best time of the day on his Aprilia, trailing Coma by 2:05. An increasingly regular performer at this level, Olivier Pain took fourth, but a 12-minute penalty given to the Yamaha rider on stage 2 pushes him back to 12th place in the general standings.

For the moment, the fight for the third place on the podium, currently occupied by Lopez, is taking place 20 minutes behind Coma.

Though the Argentineans continue to dominate the quad category, the distribution of roles is changing. Marcos Patronelli has finally withdrawn from this third Dakar before leaving his country. He leaves his older brother to battle to try and succeed him in the race’s roll of honour. However, today it was a newcomer to the rally, Tomas Maffei, already winner of his first stage yesterday, who took the lead in the general standings. He sits atop a 100% Argentinean podium with a lead of 1:54 over Patronelli and 3:11 over Halpern. 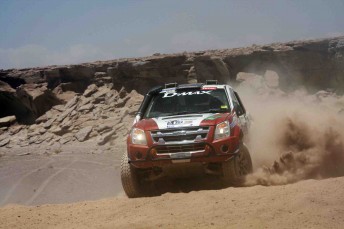 Sydney’s Bruce Garland and Harry Suzuki are looking forward to a good night’s sleep after the long day in their Isuzu D-MX ute. At the end of it all they had retained 19th place on the road, and are still first in their class.

“No heroics today. It was all about survival! There was lots of bulldust and rocks on the stage which could have caused problems, so we just took it gently. A lot of buggies went past us because it was real buggy territory, but we live to fight another day and that’s important. There’s still a long way to go.

“We just took it as steadily as we could. We drank plenty of water and breathed slowly and that seemed to help. I’ve got a bit of a headache now, but it’s not too bad. Other than that, everything is fine. The car went well, all things considered, and we had no mechanical problems or any other issues.”

Geoffrey Olholm and Steve Riley (BMW) moved up another five positions up the field to be 41st.

In the bikes a tough day for Jacob Smith who dropped from 22nd to 35th overall. Simon Pavey hit back to be 89th, Warren Strange is 94th while Mark Davidson is 107th.

Tomorrow’s fifth leg from Calama to Iquique in Chile includes 423-kilometres of timed running. Competitors will have to deal with a variety of terrains which each demand a special type of driving or riding. After a slow start on rocky, bad tracks, the crossing of a “salar” will also bring the average speed down: this section measuring just a handful of kilometres will keep the riders and drivers busy for about one hour. However, the day’s finish will take place on wide open off-track terrain over around one hundred kilometres. The festival of dunes is rounded off by the descent to Iquique, which promises a whole bag of thrills to all thrill-seekers. Opposite the sea, the competitors will descend a 2.3-km slope, at an average gradient of 32%!