Orrcon is the envy of many: Mark Larkham

Orrcon is the envy of many: Mark Larkham Orrcon Steel celebrates its 10th-consecutive year as a supporter of V8 Supercars this year after announcing today that it has re-signed with Ford Performance Racing for a further two years.

In 2002, driver-turned-commentator Mark Larkham introduced Orrcon to the sport – and they haven’t left since.

For a full look at Orrcon’s involvement in V8’s CLICK HERE for the breaking news story on Orrcon’s new deal with FPR and the first images of Mark Winterbottom’s #5 FPR Falcon FG. 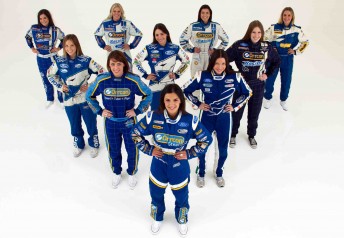 “In the modern era of sporting sponsorship, Orrcon Steel has become the envy of many,” said Larkham.

”To justify 10 years of major involvement in V8 Supercars means just that – justification. It has to be measured, and it has to deliver.

“I have worked with many, many sponsors over my time in motorsport, and some high profile brands, but hand on heart, no-one understands how to exploit their investment in motorsport better than Orrcon Steel. In this regard they are the envy of pit lane, that is a fact.

“I particularly enjoyed my time with Orrcon Steel. Like all good relationships it started with a handshake at my race workshop in 2001. For me the real key moving forward was the quite intimate integration of the race team and Orrcon Steel to achieve mutually beneficial objectives.

“My relationship with the management and staff at Orrcon was the best sponsorship relationship I’ve had, and I trust after 10 years it has also served them well. In fact when we started way back then, everyone thought Orrcon was some sort of telecommunications company. Now there is no doubt, and top of mind recall of Orrcon simply means ‘Steel’ – well done.”

Orrcon Steel Managing Director Leon Andrewartha said that its association with V8 Supercars has been rewarding.

“It is great to be involved in V8 Supercars for 10 years,” said Andrewartha.

“We started out with Larkham Motor Sport and that was fantastic for us as a business.

“We have now got a very strong relationship with the team at Ford Performance Racing, which allows us to utlise a great sponsorship platform.

“Ten years is a long time to be involved in a sport like V8 Supercars, the partnership has been very rewarding for Orrcon Steel as a business and we hope to continue the association for a lot longer.”

Across the company’s time in the sport, Orrcon Steel has enjoyed various amounts of success with their teams and drivers, including Mark Winterbottom’s first event win in 2007 and his runner-up finish in the 2008 championship, Ford Performance Racing’s two pole positions at Bathurst, Jason Bargwanna’s most recent podium finish (2006) and Steve Richards leading home FPR’s first one-two in Darwin in 2008.

This year, Winterbottom and FPR is aiming for the elusive Bathurst and championship wins.

Besides its involvement in V8 Supercars, Orrcon Steel is also a supporter of a number of other organisations in Australian motorsport, including Speedcafe.com.au as a founding platinum partner.