Carlos Sainz held onto the lead in the car category, despite the stage victory of his Volkswagen team-mate, who only slightly closed in on the Spaniard. Cyril Despres holds on to the bike race lead by only a small margin.

After Sainz won the opening two stages of the event, the car race witnessed a new stage winner. Nasser Al-Attiyah was aware that today was vital if he was to challenge for victory, but although he won the stage he was certain his car was down on power.

On the roads to Jujuy, the Qatari set off behind Sainz, then soon caught up with the Spaniard’s dust cloud without ever being able to overtake his rival. Although he complained that his engine was lacking power, Al Attiyah especially came up against the Sainz’s capacity of resistance, skilful enough to break away in the canyons as in the forests. At the finishing line, Al Attiyah’s Race Touareg had only gained 25-seconds over Sainz in his pursuit. He also triumphed for a ninth time on a Dakar stage, though this could transform into a trap tomorrow when he will have to open the road in front of his team-mate.

“We had exactly the same problem as yesterday. We completely lost power after 200 km. I don’t know why. That’s three days the same thing has happened. I gained one minute 30 on Carlos in the first part, but I lost my lead on the technical section where you must always use 1st, 2nd and 3rd gear.

We must fix the problem. I don’t care about our time or the special stage victory. Tomorrow there will be dunes and soft sand and that will be a problem”.

Stephane Peterhansel lost his second place to Al Attiyah but is only 59-seconds back. Behind Peterhansel, former winner Giniel De Villiers is driving a good race and remains in fourth with Krzysztof Holowczyc five minutes further back in the general standings.

In the trucks, Vladimir Chagin struck with a traditionally strong performance. Winning the stage with a lead of 6:45 over his team-mate Firdaus Kabirov, he also knocked him off the top in the general standings, which he know leads by 6:23. Up to the present, Ales Loprais has continued to take on the role of outsider. The Czech driver and his Tatra is still in third, 6:37 behind. 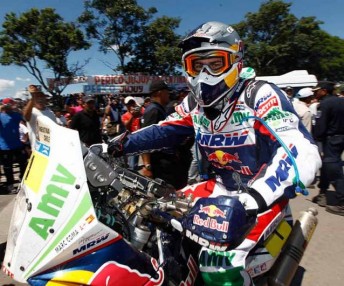 The sharp increase in mileage to be covered thrust the Dakar riders into a new dimension of the race. The change in terrain, demanding more subtle navigational skills than on the last two stages, gave rise to a number of different scenarios. Cyril Despres, who had distanced his rivals in an unruffled manner up to this point, lost a significant part of his lead due to several mistakes at the start of the day. After 113 km of racing, the title holder found himself even more than four minutes behind the BMW belonging to Paulo Gonçalves.

Marc Coma took on the role of opening the road and he picked up his 12th stage victory on the Dakar ahead of Despres. The Frenchman, who managed to make up some of the time lost during the second part of the day, held on to his position as leader of the general standings by just 14 seconds.

“That was a really authentic Dakar day: the first part with lots of navigation, then more riding on the rest,” said Coma.

“I’m happy with where I am. I took advantage of a little navigation mistake by Cyril Despres. Of course it’s important to win a special, but my aim is to win the rally”.

In the quads, the Argentineans are in the process of taking over the quad race in which Josef Machacek, the leader at the start of the stage, lost a serious amount of time. On completion of the 521 kilometres, a newcomer to the Dakar, Tomas Maffei, obtained the best time, in front of Sebastian Halpern and Alejandro Patronelli. The day’s three quickest riders also make up the provisional podium in the general standings and are only separated by little more than a minute.

All of the Australian entrants completed the long stage with Bruce Garland and Harry Suzuki maintaining their 19th place overall, while Geoffrey Olholm and Steve Riley (BMW) moved sixth positions up the field to be 46th. 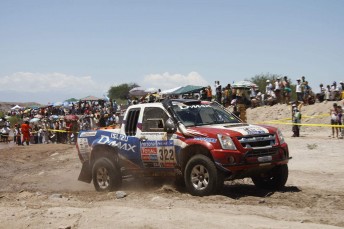 “The first 50 kays or so was like good old Australian bulldust and we got stuck behind someone in that, and a bit bogged down, and lost five or 10 minutes for starters,” said Garland.

“Later on, we climbed to about 3800m. It was stunning country, but bloody hard to breathe – for us and the car. They always struggle a bit at higher altitudes.

“Then the last 100km was more like a rally road and it was fun, but that first 50km was brutal and a bit of taste of what lies ahead when we get into the sand dunes in the Atacama Desert.

“In all honesty, it wasn’t as good a day as we’d like. It was a very long day, and quite a tricky one. We had hoped to gain a place or two, but at least we haven’t fallen back. And the car is running well. The new Toyo tires are working really well too.”

On the bikes Jacob Smith is placed 22nd overall, while Warren Strange had another solid day to climb from 54th to 40th. A tough day for Simon Pavey who fell from 60th to 108th, while Mark Davidson improved from 126th to 113th.

San Salvador de Jujuy – Calama. The Dakar leaves Argentina provisionally to cross the Andes mountain range via the Paso de Jama pass. To reach this point, the climb will start during the night. Once they have crossed the border, the crews will ascend to an altitude of 4,800 metres. In sporting terms, the arrival in Chile also heralds the entrance to the Atacama Desert and the first off-track racing of the rally. The start of the relatively short special stage (207-kilometres) will take place at 3,300 metres. At this point, the vehicles will have to handle stony terrain as the dunes approach.