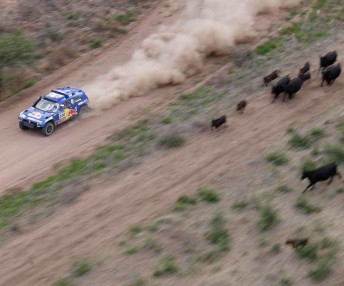 Carlos Sainz and Cyril Despres both won their second consecutive stage on the Personal Dakar Argentina Chile 2011 between Cordoba and San Miguel de Tucuman. The Volkswagen of Sainz has a lead of 3:05 over the X3 BMW of Stephane Peterhansel. In the bike category, the Frenchman boasts a lead of 2:35 lead over Marc Coma.

Sainz (Spain) was the first to start the special and like stage #1 he again had to slalom through the showers which fell on the region. Like the opening stage he again had issues with his windscreen wipers.

‘El Matador’ finished the 324-kilometre stage with the best time, giving him the 19th stage victory of his career on the Dakar. Naturally, on a route that was very similar to a traditional rally, his skills as two time WRC champion made for a sparkling performance when he hit the tracks.

Volkswagen team-mate Nasser Al Attiyah showed that he can give the Spaniard food for thought. The Qatari finished 1:03 behind his team-mate, but Stéphane Peterhansel is still the most threatening rival for Sainz, 3:05 behind.

“It was a difficult stage to tackle again and I had windscreen wiper problems again – they wouldn’t work properly,” said Sainz.

“For a dozen kilometres, I couldn’t see a thing and I had to drive very slowly. I’m very disappointed. I’ve probably lost a lot of time. I don’t understand why we still have this problem, because the mechanics checked everything yesterday.

“Overall, though, this stage suited me rather well”.

For the rest of the field, it was someone else’s turn to have problems since Guerlain Chicherit, who lost almost an hour on stage one, regained a standing which better suits his expectations for his Mini Countryman: he grabbed the seventh best time, after having overtaken a dozen cars on his way. However, Mark Miller (VW) crashed 45-kilomtres into the stage and he was forced to stop on several occasions. In total, he lost almost 50 minutes to his team-mate Sainz.

In the confrontation between the Race Touaregs and the X3, there is some sort of balance. With Giniel De Villiers (VW, fourth), Orlando Terranova (BMW X3, fifth) and Krzysztof Holowczyc (BMW X3, sixth), there are three models of each car in the first six of the day’s places. Robbie Gordon (USA) had a horror day when he slid wide and beached his Hummer on a large bolder. It took over a dozen spectators and even a rally fan’s Fiat road car to help get the two-wheel-drive monster back on the road. 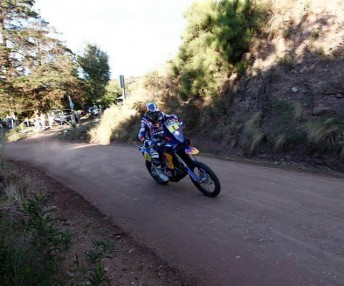 In the truck race, it was the turn of Firdaus Kabirov to win his first special stage this year. In the absence of Gerard De Rooy, who withdrew during yesterday’s stage following an accident that aggravated an old back injury, Ales Loprais has fully taken on the role of thorn in the side of the Kamaz drivers. Like the day before, he finished the special in second position, this time beating Vladimir Chagin into third. In the general standings, Kabirov is in front with a slim lead of nine second over the Czech driver.

Cyril Despres started the day in front after stage #1 winner Ruben Faria was handed a one-minute time penalty for breaking the speed limit on a road section. Even though the day’s task was not the most demanding in terms of navigation, Despres succeeded in achieving the hardest trick in rally-raid racing: staying out in front from start to finish. On completion of the 300-km special, the Frenchman boasted the best time, winning the 25th stage of his career on the Dakar.

“Today the track was full of bends and very skiddy, like a 300-km giant slalom with jumps, like skiing,” said Despres.

“I noticed at the refuelling point that I’d taken almost a minute less than Coma. I was feeling good, so I decided to attack a bit in the second part, though I was careful to look after my tyres because I nearly wore them through today.

“The most important thing is to find a god pace and have the right feeling. For the moment, the riding demands a lot of concentration”. 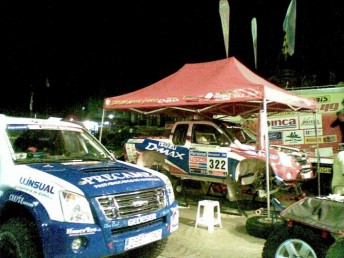 The Isuzu team at the bivouac

A duel is starting to be outlined with Marc Coma, who finished 1:49 behind on the stage and is trailing by 2:35 in the general classification. Faria is already 6:13 back in third. David Casteu aboard a Sherco was the quickest pursuer of the KTM bikes on the route to Tucuman. Trailing the leading duo by 3:46 he climbed up to sixth position in the general standings, but remains behind Francisco “Chaleco” Lopez and Paulo Gonçalves. The fight between Aprilia, BMW and Sherco is underway and might not just be a battle for the crumbs left by KTM.

In the quads Alejandro Patronelli regained some prestige for the brotherhood of Argentinean quad riders by winning the stage after a very tough struggle with Josef Machacek. The Czech leader lost by only 0:24 but holds onto the overall lead by just over five minutes over the older of the Patronelli brothers.

Another solid day for the Australians competing in the Dakar with Bruce Garland and Harry Suzuki bringing their Isuzu home 18th on the stage to be 19th overall.

“We actually had a good day,” said Garland.

“We could have gone faster but we didn’t. One reason was the conditions – lots of dust and lots of rain, narrow tracks, then undulating plains. It was a brand-new stage for the event.

“The other reason – the main reason – is that we’ve found a good pace that suits the car and suits us and we’ll just maintain that over the next few days. The underlying strategy, apart from obviously not wanting to damage the D-MAX, is make sure we are well ahead of the trucks.

“At the moment they are running a different course to us, but the field joins up again on Day Four or Five, and you want to be way ahead of them because if you get stuck somewhere, they can literally run right over the top of you.”

On two wheels Jacob Smith was 20th on the stage to be 21st overall; while Warren Strange climbed 30 spots to be 54th, Simon Pavey dropped sixth spots to be 60th and Mark Davidson fell from 105th to 126th.