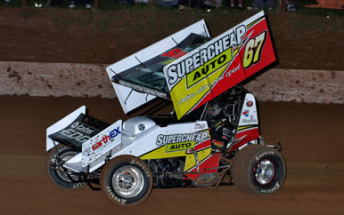 V8 Supercars team owner Paul Morris has taken his first Sprintcar podium at the Titan Garages Brisbane International Speedway last night, and says that it ranks as one of his career highlights.

Morris finished third behind winner Todd Wanless and American Brent Kaeding in Round 4 of the KRE Race Engines Track Championship at Archerfield in Queensland.

After starting seventh, the result is Morris’s best Sprintcar finish in his third speedway season.

Morris told Speedcafe.com.au that standing on the podium next to Kaeding – one of his heroes – was a crowning moment.

“It was awesome – a real career highlight for me,” he told Speedcafe.com.au.

“The track was good. It had a bottom and had a top. We were thinking that we’d run the bottom and just stay there. From there we just passed cars! I got up to Todd and Brent, and they were going pretty hard, so I thought that I’d stay in third, and that was pretty good.

“Brent is a bit of a hero of mine. He is one of the best Sprintcar drivers in the world, and to be standing next to him on the podium is one of the highlights of my life, to be honest.”

Morris says that he is now starting to get the hang of sliding his Sprintcar around the dirt, admitting that he is no longer scared by it.

“It’s all starting to come together. I’m starting to understand what the car needs. Understanding how the geometry of the car works. Now I know what I want from it,” he said.

Morris will compete over the next few nights at Archerfield. Tomorrow night is the $10,000-to-win Capalaba Wreckers Sprintcar Cup before the $20,000-to-win Titan Garages Australian Sprintcar Open/World Series Sprintcars events on Friday and Saturday nights.

Morris will also make his debut in ‘The Classic’ at Warrnambool later this month before concentrating his energies on his V8 Supercars team.