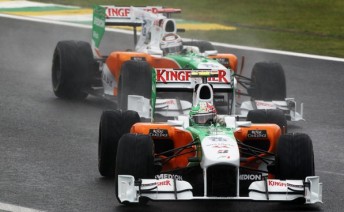 Tonio Liuzzi leads Adrian Sutil in Brazil, but finished four places behind his team-mate in the 2010 championship

The 2011 Formula One grid continues to take shape, with Force India set to officially announce its driver line-up in the coming days.

While German Adrian Sutil appears highly likely to stay with the Silverstone-based team for a fifth successive season, it is believed that his 2010 team-mate Tonio Liuzzi will not see out his contract.

The newspaper also stated that Hulkenberg will undertake Friday practice duties for the team on Grand Prix weekends, and quoted the German’s manager Willi Weber as saying that Force India was not his first choice.

“I actually wanted Nico to be the third driver at McLaren,” said Weber.

“But (McLaren team principal) Martin Whitmarsh was worried that it would be seen as a threat to (current McLaren driver Jenson) Button, so he didn’t want to disrupt the harmony in the team for their championship hunt.”

If di Resta is promoted to race driver duties at Force India, Bahrain’s season opener will mark a return to open-wheel racing for the 24 year old Scot – who beat Sebastian Vettel to the 2006 Formula 3 Euro Series title.

Di Resta has spent the last four seasons driving for Force India’s engine supplier Mercedes in the DTM, culminating in the 2010 title.

“I don’t see any reason why Paul shouldn’t be on the (Formula One) grid,” Stewart told Edinburgh Evening News recently.

“He’s impressed everyone with what he’s achieved during his Friday test sessions with Force India, and he’s fast.

“But he’s also very clever, astute and — from what I’ve heard — very good with his technical feedback.

“I definitely think he’d help strengthen the grid even more.”