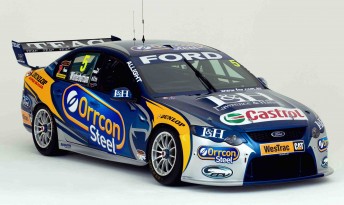 The new colour scheme coincides with the confirmation that Orrcon Steel will remain as the entry’s major backer – the 10th consecutive year that the steel giant has been involved in V8 Supercars competition.

Orrcon Steel has signed with FPR to be a corporate partner for the next two seasons.

The new arrangement makes Orrcon Steel one of the longest running non-automotive naming rights sponsors currently in the championship.

In 2003, the team stepped up to two cars, with Jason Bargwanna joining the ranks.

Larkham retired from the driver’s seat at the end of 2003, making way for Mark Winterbottom to drive for the team. The LMS team folded in 2006, with Orccon supporting Craig Gore’s two-cars of Jason Bargwanna and Max Wilson.

Orrcon switched its support to FPR in 2007, reuniting with Winterbottom, with that combination celebrating its fifth season together this year.

“It is not only 10 years for them in the sport, 2011 will also be their fifth year with us as a team, one of the real keys in this championship is having consistency,” said Edwards.

“Orrcon Steel is really the class act when it comes to sponsorship activation in the V8 Supercar Championship. Every other sponsor in the paddock looks towards what Orrcon Steel does enviously, as they leverage their sponsorship so well. They put on the best corporate hospitality and best experience for all of their guests.”