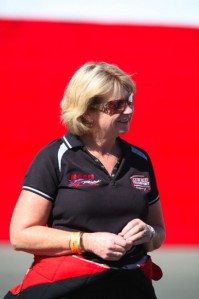 Reed was treated at the scene by medical staff before being transported by road to Ipswich Hospital, where she remains in a stable condition.

“Debbie is remaining under observation after the numerous tests carried out overnight by the staff at Ipswich Hospital returned clear results.

“All tests to this point indicate that she has not suffered head injuries, contrary to other reports.

“She will continue to undergo tests, but overall is recovering well.”

The incident occurred following Reed’s first qualifying pass of the night, where she set a time of 5.980 seconds at approximately 360 kilometres per hour.

After crossing the finish line, Reed’s Top Alcohol dragster came into contact with the barrier wall of her lane.  The dragster then continued across the track into the opposite barrier before the dragster flipped several times before coming to a stop in the braking area. Further information will be released as is appropriate.