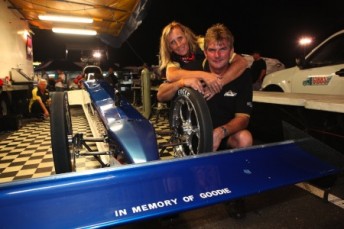 Steve ‘The Pom’ Read and Gary Phillips are leading the way in Top Fuel and Top Alcohol respectively at Willowbank Raceway’s New Year Series (round one) following this evening’s qualifying for the two ANDRA Pro Series brackets.

Read and his team are competing in honour of team member Steve Goodwin this weekend, who passed away recently following a brief battle with cancer at the age of 52.

“For the first run, we used data that we had from a previous New Year Series effort and mirrored those settings, and although it dropped two cylinders on the run we still ran the 4.785 second pass and secured the low elapsed time and high speed so far,” said Read, of Raceview.

“We are racing this weekend for ‘Goodie’, our team mate Steve Goodwin who unfortunately passed away on Christmas Eve, he was trying so hard to make it to this event but it just wasn’t to be unfortunately. 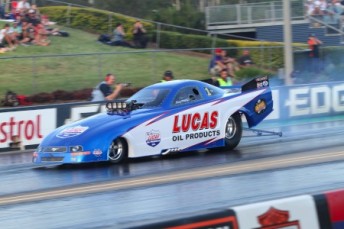 “Tomorrow we will leave the dragster as it is, and hopefully if we get to the final the data we gained from tonight’s last run will help us with the set up for that.

“It is also great to have my old crew chief Ray Ward back with us this weekend, he is taking a lot of the pressure off me and we are able to work together to try and get the best out of the car.”

In Top Alcohol, reigning champion Phillips raced through to a top qualifying performance in the final qualifying round for the bracket this evening.

That performance also sees him with the low ET and high speed of the meeting at this point.  Second and third fastest were Aaron Hambridge and Wayne Newby.

“We have new parts on the Lucas Oil Funny Car and we have been sneaking up on it across the evening, improving with every run,” said Phillips.

“As far as tomorrow goes we will be taking it round by round, doing the best we can, trying to gain as many points in the championship as we can as we chase that title.

“By top qualifying today we have eight points already locked away and if we can hold onto the top speed and low ET points through tomorrow that’s another 10, and every point counts!”

Also in Top Alcohol, 51-year-old Debbie Reed of Brendale (QLD) suffered a high-speed crash during her first qualifying run after crossing the finish line. Reed was treated at the track by medical staff before being transported by road to Ipswich Hospital where she remains in a stable condition.

Eliminations will kick off on Monday for Top Fuel and Top Alcohol from 5.00pm, with finals for all brackets scheduled for from approximately 9.20pm.  For more information and results, please visit www.willowbankraceway.com.au