Aussie teams ready for the Dakar

Aussie teams ready for the Dakar 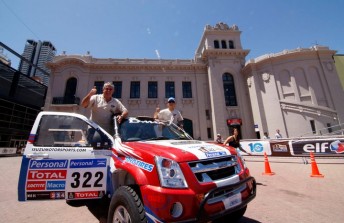 Bruce Garland and Harry Suzuki ready to start the 2011 Dakar

The final countdown is underway for the start of the 2011 Dakar Rally, with competitors heading out of central Buenos Aires early tomorrow morning, Australian time.

This is the third time the legendary off-road marathon has been held in South America (after terrorists forced the cancellation of the 2008 event in its traditional home of Africa), and the third time the Isuzu Motorsports team of Sydney-based Dakar veterans, Bruce Garland and Harry Suzuki have entered the race.

Garland and Suzuki’s best result was their first attempt in 2009: 11th outright, first ‘amateur’ (non-factory team), first diesel ute and first production chassis car. They were forced to withdraw at the end of Week One last year, after a freak incident in which a spare wheel smashed the radiator.

“Our plan doesn’t really change from year to year – we start out slowly and steadily, trying to stay out of trouble but keeping on the pace,” says Garland.

“The attrition rate is always high early on as people try to get a handle on the event, but there is no point trying to be a hero at the start. This is a very big event – 14 days – and if you push too hard too early, you come unstuck. We’ll just pace ourselves through the first week and wait and see what’s happening around us before we start making a move in Week Two.”

Ahead of the crews is 9618km of tough territory, of which 5020km is timed competitive sections (13 stages), which include racing at altitudes of up to 5000m, in sand dunes around one kilometre high, and through the world’s driest desert, the Atacama.

“It’s the biggest motorsport challenge there is,” says Garland.

“It’s physically hard and it’s mentally hard. You can be out there for eight, 10, 12 hours. Then you get into camp, work on the ute, shower, grab something to eat, hit the swag and get up and do it all over again.

“But it’s like a drug and once you’re addicted, it’s hard to keep away. You just keep coming back and trying to do it better each time.” 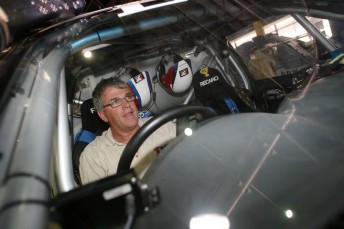 Garland during the arduous scrutineering process

The team is driving a new Dakar-spec Isuzu D-MAX ute that’s lighter, faster and better handling than their 2010 vehicle but still based around the D-MAX’s steel cab and chassis frame.

The crew has added a new race engine this week that is another step up from the one used in the ute’s debut at last year’s Australasian Safari. That was a tweaked 3.0-litre turbo diesel Isuzu engine which produced approximately 630Nm of maximum torque and around 192kW of peak power, or an increase of 75 and 60 per cent, respectively, on the standard Isuzu D-MAX engine.

“The difference from that to the 2010 ute was like flying a jet plane compared to one with a propeller – but this new engine has even more top-end speed, and I think it should go very well. Fingers crossed, anyway!”

First ‘cab off the rank’ will be 183 bikes, departing at intervals from midday on January 1 (2am Sunday morning, eastern Australia daylight saving time). The order will then be 33 quad bikes, 146 cars and 68 trucks at 20-30 second intervals, heading out of town for 334km to the first overnight stop, and the last sleep before competition begins in earnest on January 2.

As Car 322, Garland and Suzuki are one spot behind Stephan Scott and Holm Schmidt in a BMW X3 CC, the last car in the massive Monster Energy X-Raid team which includes previous winner Stéphane Peterhansel. For an extended ABC Radio Grandstand interview CLICK HERE. The GHR team unloads their bikes in Argentina

Garland will be joined in the auto division by Coconut Resort Cairns-sponsored and BMW-powered custom Rally Raid machine of Geoffrey Olholm and Steve Riley. Olholm and Riley are off-road veterans, but not on four wheels. Olholm is a former motocross and motorcycle enduro champion, while Riley is also a former enduro motorcycle champion and a two-time winner of the Australian Safari. The duo took part in their new car at the recent Pharaohs Rally in Egypt.

Six Aussie riders will take part in the moto section, including a four-bike entry from GHR Honda. Headed by 2009 Australasian Safari winner Jacob Smith, the team will also field entries for Simon Harslett, Warren Strange and Mark Davidson. Also aboard a Honda will be Andrew Scott, while Simon Pavey will ride a BMW.

While the event is always tough, this year’s will be even trickier, not just because of some new territory to be covered, but because organisers have tightened some regulations.

Whereas in the past, crews were allowed to pass within three kilometres of each ‘check point’ on the route (using the special event GPS they are issued), this year they need to be logged within 800m of them or run the risk of being disqualified.

Safety for competitors and spectators is paramount, with at least one million people expected at the start line in Buenos Aires. No less than 25,000 Argentine and Chilean police officers will maintain security on the event, along with 30 officers from the Argentine national security agency and seven helicopter crews.

Check out this preview clip from Foxsports News