Sensational win by Steve Lines at the Bridge

Sensational win by Steve Lines at the Bridge 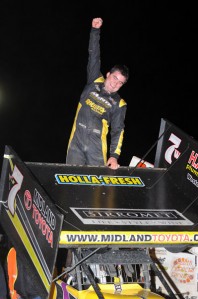 Steven Lines broke through for his maiden victory in round six of the World Series Sprintcars Championship at the Murray Bridge Speedway in South Australia last night.

Starting from position four in the A Main, Lines took advantage of David Murcott and Kerry Madsen battling for the front running to manoeuvre his way into the lead just prior to mid race distance.

The Monte Motorsport pilot was never headed from that point and went on to cross the line ahead of Madsen, who finished runner-up for the second straight night, and local driver Trevor Green, who made a late race charge to finish third ahead of Robbie Farr and Murcott.

“Finally…I have been wanting to break through for this win for a long time,” Lines said.

“I can’t thank everyone enough, the Monte Motorsport team have shown a lot of faith in me and it’s great to repay them with a win tonight.

“We tried something in the Dash and I just didn’t work but then we got it right when it mattered most.”

After lowering the track record in the Silver dash to 10.993 seconds, Brooke Tatnell’s chances at a second straight win were dashed on the opening lap.  The Krikke Motor Sport pilot suffered a flat left rear tyre after opening lap contact with Murcott as the pair raced into turn one.

Max Dumesny was the big mover in the main events.  After a disappointing run during qualifying and the heat races Dumesny found himself in the unusual position of lining up in the C Main – which he duly won to transfer into the B Main.

On a track that had become very racey, mainly due to the curators not continuously preparing it, Dumesny then charged his way from the back of the field to secure the final transfer spot into the main event.

His charge continued in the 35-lap main event to be running inside the top ten before crossing the line in 11th.

Jason Johnson was another big mover to move through the field from 13th to sixth place at the finish.