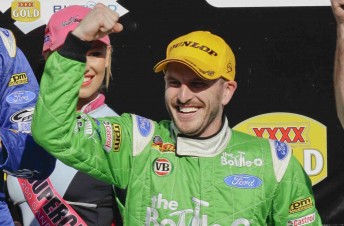 In 2010, Dumbrell took on the biggest challenge of his V8 career, switching from Holden to Ford’s factory team. He was also promoted to the CEO of Automotive Brands company, plus upped the amount of endurance iron men and marathons he competed in.

And to top off his busy year, he won his first race ….