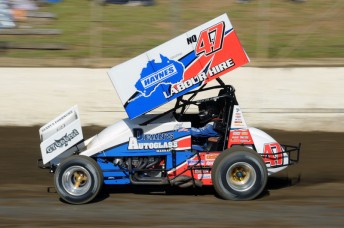 American Jason Johnson continued his domination of World Series rounds at Mount Gambier’s Borderline Speedway by taking his fourth straight round win at the venue tonight.

The two-time ASCS Champion qualified a lowly 20th before having luck on his side during heat one when he suffered damage to the top wing on his Haynes Motor Sport entry while attempting to avoid an incident.

Despite the damaged wing Johnson went on to win the heat and then backed it up with another victory in the second round of heats on a slickening track.  His good run then continued in the Shootout when he posted the fastest time in the Gold Shootout to claim the all-important pole position for the 35-lap Main Event.

Johnson raced wheel to wheel with Ian Madsen, who started on the outside of the front row, into turn one before the American shot to the lead as the field raced down the back straight for the first time.

With the race going caution free, Johnson had to battle with lapped traffic while fending off a number of spirited challenges from young Madsen to take his first win of the 2010/2011 series.

“After time trailing so bad we changed just about everything there was on the front end of the car, and it all seemed to work,” said Johnson.

“I was very lucky to get through that opening heat but it shows when luck is with you, it’s really with you.

“The track started to lay rubber in the middle there near the end, I was coming up on lapped traffic and I knew that Ian was right there.  I couldn’t afford to move off the line because if I did he would have had me.

“It’s great to get a win on the board, especially here in GT’s Town (Johnson’s sponsor GT Bobcat).  It will give everyone in the team a boost after what has been a tough start to the year.”

Brooke Tatnell was the hard charger of the field coming from 11th at the start of the main event to cross the line in third place.  David Murcott finished fourth ahead of Danny Reidy while series leader Robbie Farr came home seventh.

Local driver Steven Lines went from hero to zero in a matter of 24 hours.  After winning his first World Series round on Monday night at Murray Bridge the Monte Motorsport driver upended his machine while battling in the B Main tonight.