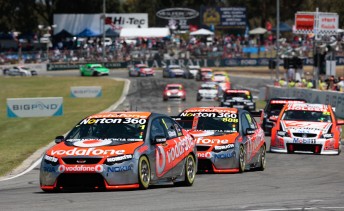 V8 Supercars has announced a date change and a new event name for the Perth race in 2011.

After a year away, the return to Barbagallo Raceway has been brought forward one week in the 2011 calendar – the event will be known as the Trading Post Perth Challenge.

V8 Supercars decided to move the Perth event forward to April 29 until May 1 to secure a better broadcast deal on Channel Seven.

The original event date (May 6-8) presented a clash with Channel Seven’s AFL coverage, but bringing the Trading Post Perth Challenge forward one week ensures the best-possible broadcast times for V8 Supercars in Perth. Plus it will avoid clashing with Mothers Day.

Telstra will continue to back the Barbagallo Raceway event with its classified brand, Trading Post.

Telstra previously held naming-rights sponsorship of the Perth event from 2007-2009 through its brand BigPond.

“We take the broadcast of our sport very seriously, as does the Seven Network and we work hard to ensure all our loyal supporters receive the best-possible television coverage. This date shift is a move to guarantee our fans, sponsors and teams the best possible exposure and coverage for the Perth event.

“We’re all excited about V8 Supercars returning to Perth and, with Trading Post now on board, it is guaranteed to be an amazing event.

“Telstra and V8 Supercars have an outstanding relationship and it’s great they have come on-board as an event sponsor of the Perth event with its brand Trading Post.

“Trading Post has been a part of the Championship as a team sponsor throughout the 2010 season and it’s great to see further promotion of the brand through this event naming-rights sponsorship.”

“Bringing the event forward a week works on several levels. It’s great for local fans, and more importantly their mums. It will also provide better television coverage for fans in other states and here in WA and from Eventscorp’s perspective, it will guarantee maximum exposure for the State,” he said.

“Eventscorp will be working hard to help promote the event locally, nationally and internationally to make the 2011 Trading Post Perth Challenge bigger and better than ever.

“It is very exciting to have the V8 Supercars Championship Series back in Perth.”