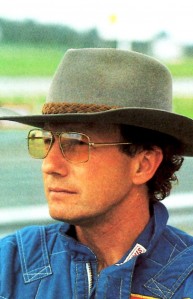 Australia’s own Hungarian, George Fury, is one of the greats of Australian motorsport. He is a two-time Australian Rally Champion; he came second in the Australian Touring Car Championship – twice – and has enjoyed his time on the Bathurst podium.

Only last month Fury was recognised as one of Australia’s top 50 drivers of the last 50 years.

Fury’s career does not read like current V8 drivers, most of whom started arcing at the age of eight and progressed through a variety of classes. Fury enjoyed his driving but didn’t start racing until his late 20s.

“I’ve always been interested in cars, when I was 28 and I decided it was time to do something about it or not at all,” George Fury told Speedcafe.com.au

“I had a government job as a technician at the time, I bought myself a MK I Cortina and decided to race.

“That was just the way it went, one wonders how different things would have been if I’d gone go-karting at 14?”

Fury’s first race was in a rally car. He decided rallying was the way to go due to its affordability.

“I started with that the MK I Cortina,” said Fury.

“I was a partner in a business, I had a $25,000 share, I started rallying with that money. I gave myself three years.

“I went rallying because I thought I’d get the most miles for my money, I didn’t particularly love rallying, I would have gone circuit racing if I thought it was money as well spent.” 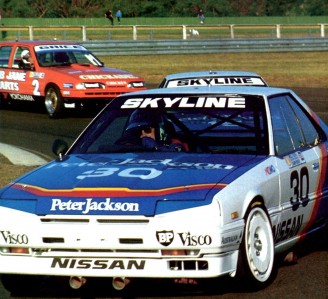 Fury at the wheel of the Group A Nissan Skyline

It was soon after his first rally that his relationship with Datsun started. It was to prove a fruitful relationship. With Datsun changing its name to Nissan, Fury drove almost exclusively for the manufacturer throughout his career.

“At the time Nissan used to be called Datsun and Datsun was having a real go at winning the best event – the Southern Cross Rally,” said Fury.

“We were asked to drive one of the previous year’s cars, from 1974, in that rally. I prepared it mechanically, except the engine, I knew it was a time bomb, it blew up on the second night but we did sufficiently well to get another car the following year.

“That next year I hit a stump, losing us some momentum but we came fourth I think.

“At the same time I bought a new Datsun 180B, I converted it into a rally car with some of the works bits and it just went on from there. Slowly but surely we became part of the works rally team.”

After winning the 1977 and 1980 Australian Rally Championships and a couple of Southern Cross Rallies – the Bathurst of the Rally Championship – Fury was courted by the late Howard Marsden to drive for Nissan in the touring car championship.

“Moving from rally events to touring cars was quite simple really,” said Fury.

“The first time we won the Southern Cross rally was in an Australian built Datsun. Rallying was in its heyday in the mid-70s but by the late 70s the interest by companies like Ford and Mitsubishi had dropped off and they pulled the pin. 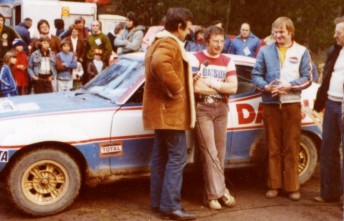 Fury and Monty Suffern were stars on the gravel. Photo: Neil Taylor

“There was no point in Datsun staying in. When Datsun Japan decided to change their name to Nissan Howard Marsden sold the idea to Nissan that if we went circuit racing with a car it would be a really good way to show the change in the name, which is why we got the budget to prepare the Nissan Bluebird for circuit racing.

“As far as I’m concerned Marsden knew I was reasonably good at driving on bitumen and he didn’t really want to put a star driver into a fledgling little team so he asked me to stay with the team and drive touring cars.

“It wasn’t a conscious decision to move away from rally cars, it was just the next step and Howard made it happen.”

Fury’s touring car record is impressive: eight wins, 21 podiums, twice runner-up in the championship (1983 & 1986), pole at Bathurst (1984) and third at the mountain (1987). Despite him falling short of ultimate success he still rates touring cars, just not as highly as his beloved rallying.

“I think both championships are good, both were so different,” said Fury.

“Rallying has always held a soft spot; it’s more of a team effort with the navigating. 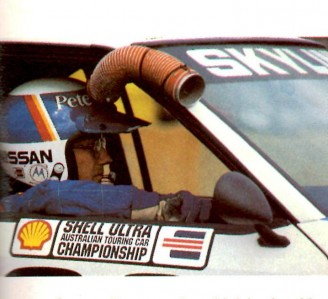 The Talmalmo farmer was one of Nissan's great drivers

“Late in my career we did a few pace noted rallies, which are the ultimate in terms of team coordination; I really enjoyed them.

“As for touring cars, I loved the racing but you’re kind of all by yourself doing a 25 lap stint.”

Fury’s favourite memory comes from winning the Southern Cross Rally with Datsun of which Datsun had been trying to win for more than a decade. International drivers would come out and Fury managed to beat them all. He was taken to Japan as a sincere thank-you from the automotive giant.

“Datsun Japan had been trying to win that for 10 years, way before I got involved, winning it was huge for everyone.

“We got flown to Japan like heroes really, we saw the president of the company; that was a real highlight.”

Fury doesn’t come across as being someone that lingers over any regrets, but it did disappointment him to have come so close to winning a touring car championship and falling short at Bathurst

“I came second in the Australia Touring Car Championship twice, I never actually won it, that’s a bit of a disappointment,” said Fury.

“I never won Bathurst either.

“There was one year that we really thought that we had a great chance, it was 1986, the team built a brand new car for me for Bathurst.

“The old cars had a different roll cage design and the new chassis was a lot stiffer and our spring/shock package didn’t work at all on the new car.

“We could not get it to handle well, if we’d had run the old chassis we had the chance to win Bathurst, that was our year.

“Coming third in 1987 was good but no cigar, you always look to win. To be honest it was pretty good for us, we didn’t have the full potential to win, but to be out there on the podium at the end was pretty special.” 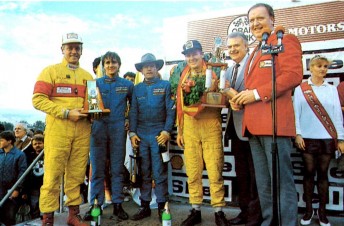 In 1993 Fury decided he’d had enough and announced his retirement.

“I raced because I loved driving, that was the motivating factor,” said Fury.

“If there was more pain than enjoyment, and it was always a balance, then I would give it away.

“All the publicity and promotional commitments, it wasn’t my bag, so in 1993 I retired.

“I just thought my patience had run out with what I had to put up with, I was still driving well, the driving wasn’t the reason for the retirement.”

Having some land at Talmalmo not far from Jingellic, near Albury, the Furys retreated to the land, which is where you’ll find him now.

“My wife and I bought into a little farm were we have about a thousand acres,” said Fury.

“I just enjoy living here, I enjoy the isolation and I like being as self sufficient as possible without being completely alternative.

“I’ll stay here until I can’t control the farm, until then I’m happy being here.”

Here is a profile on Fury from Bathurst in 1987

Here is Fury winning pole at Bathurst in 1984

Check out the Talmalmo farmer at a Canberra Rallysprint in 1985

Finally here is Fury with classic Racecam from Bathurst in 1983