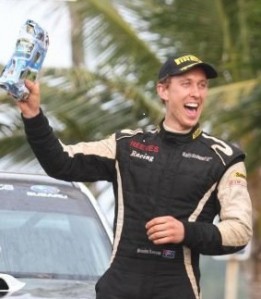 Rising Australian rally star Brendan Reeves has announced that 2011 will be a make or break year.

The Aussies will be part of a series that will include 24 drivers from across the globe competing in identical 1.6-litre front-wheel-drive Fiesta R2s all prepared and maintained by Ford’s official rally partner M-Sport. All competitors will use Pirelli control tyres.

Apart from the six drivers that received the fully funded entries, 18 other drivers will pay around $200,000 for the same opportunity.

To give himself the very best opportunity in the WRC Academy, Reeves is keen to contest other high profiled events in Australia as well as other WRC rounds.

While many aspiring motor sports stars are searching for the magic sponsor with deep pockets, Reeves and co-driving sister Rhianon Smyth have set a realistic goal of raising $100,000. The 22-year-old is also using a very modern way of spreading his message and raising the funds.

Reeves has updated his own website, but has also embraced social media via Facebook and Twitter as the way to raise sponsorship. Packages range from just $100 through to $1000, plus the team will launch a range of merchandise for supporters.

Speaking in this week’s Cafe Chat, Reeves is keen to make supporters feel part of the action.

“The biggest difference is that we make our fans feel like they are part of the team and getting a Tweet or message via Facebook with some photos has really engaged everyone,” said Reeves.

“If that means coming into a service and sending a tweet straight away that’s what we do.

“Being in competition and seeing people wear caps, t-shirts and jackets with Brendan Reeves on them will motivate us. Our goal is to be in Finland, the home of the sport, and see Brendan Reeves Supporter Club fans standing alongside Sebastien Loeb and Mikko Hirvonen supporters!”

Other fundraising events, including rally rides are all part of achieving the goal of raising the $100,000. To keep the social networking theme going click here to find out how to get involved.

Check out the profile on the WRC Academy