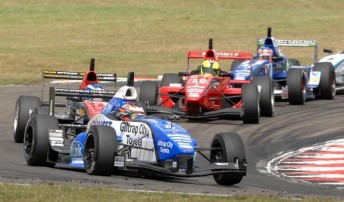 New Zealand is preparing to host a selection of the world’s rising open-wheel racing stars when the Toyota Racing Series kicks off next month.

Now in its seventh season, the one-make class will see drivers from Russia, England, Germany, Japan and Australia taking on the local talent.

Headlining the internationals will be Josh Hill, the 19 year old son of 1996 World Formula One Champion Damon Hill, and grandson of the late double World Champion Graham Hill.

Josh Hill will compete as part of a five-car effort from Melbourne-based team ETEC.

Australian Scott Pye, who finished fourth in the 2009 TRS, will also race for ETEC, having partnered Hill at Jamun Racing in this year’s British Formula Ford Championship.

The three-driver Russian contingent is set to be led by 16 year old Danill Kvyat, who is one of just four drivers currently in the famed Red Bull junior development program.

Despite the strength of the international competitors, it will be a Kiwi that starts favourite for the title, with 16 year old Mitch Evans out to defend his 2010 crown.

TRS Manager Barrie Thomlinson said he is pleased that so many international drivers are choosing to use the TRS as a stepping-stone in their careers.

“We have attracted our best ever entry from overseas and the racing will be exhilarating,” he said of the upcoming championship.

“All the overseas drivers are stepping up to major championships in 2011, so we are delighted they have chosen to start their year in our European-style series and shows New Zealand continues to have a role in the early career development of young drivers, whether they are Kiwis or internationals.”

Several of the visiting drivers will also be bringing engineers with them to run the category’s unique Tatuus/Toyota chassis and engine combination.

The five-round 2011 TRS gets underway at Teretonga on January 13-16, and concludes two months later at Taupo.