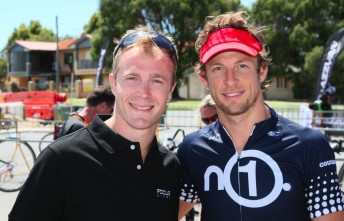 Not many racing car drivers can say that they’ve beaten Formula One star Jenson Button on Australian soil in 2010.

This year’s Australian Formula One Grand Prix at Albert Park in March saw Button’s first victory for McLaren, after an inspired early-race strategy call to switch from intermediate to slick tyres paid off.

The Briton returned to Australia last weekend in order to compete in Western Australia’s City of Rockingham triathlon, where he came across V8 Supercar driver Karl Reindler. 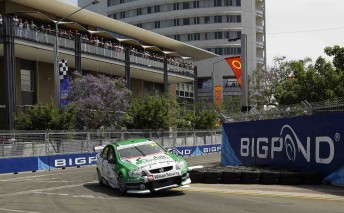 Reindler on the streets of Sydney Olympic Park earlier this month

Button’s girlfriend Jessica Michibata also competed in the event, and according to Reindler, the Japanese model was the reason that Button took part.

“Jenson’s girlfriend wanted to compete to raise money for charity,” Reindler, who chatted to Button before the event, explained to Speedcafe.com.au.

“She had a few challenges she’d set herself to do and one of them was a triathlon.

“So Jenson said, ‘alright, this could be good, we’ll go on a holiday, and do a triathlon together’.

“They came over last week with Jenson’s personal trainer and a couple of other friends to do it.

“Jenson was pretty competitive because he’d done a fair few triathlons before, and he’s had some time to train pretty hard recently.”

Reindler, who was still in karts when Button made his Formula One debut for Williams in 2000, will compete in several more triathlons before the new racing season begins.

“I’ve got at least two before the first test day (at Eastern Creek), and then another couple in February after the test day, so it’s all pretty busy,” he said.

“Doing triathlons in the off-season is a great way to unwind from racing while continuing to work on your fitness.

“I’m really looking forward to having some time off in Perth over the next few weeks.

“When you spend the whole year travelling and living out of a suitcase, it’s nice to have at least a solid month off to relax and work on preparation for the new season.”

For the record, Michibata completed her first ever triathlon in 1h 26mins, and was raising money for the United Nations affiliated Japanese refugee charity UNHCR.