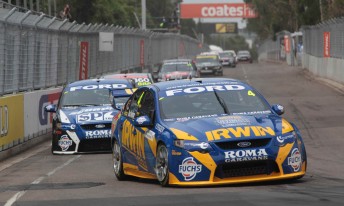 Stone Brothers Racing will remain a Ford supported team for at least the next two seasons.

The new deal will see Tim Slade join team-mates Alex Davison and Shane van Gisbergen in carrying a Ford windscreen banner next season, after the #47 entry was the only Falcon in the 2010 V8 Supercars field not to carry the windscreen branding.

SBR has carried Ford factory support since its inaugural V8 Supercar season in 1998.

After clinching three consecutive titles with Marcos Ambrose and Russell Ingall from 2003-2005, the team has won just one race in the last five seasons.

“In a tough new car market it’s fantastic to have Ford as a team partner at SBR for another two years,” said Stone.

“Knowing that we have their support for a further two seasons means we can now focus on our goal of securing another championship and it would be great to have them as part of it following on from our previous successes together.”

Group Manager Motorsport, Sponsorship & Events for Ford, Chris Styring, is also looking forward to a championship tilt from SBR in 2011.

“Ford Motor Company is both proud and delighted to be continuing its support of SBR for at least the next two years,” said Styring.

“Ross and Jimmy have shown that they have a very sharp eye for rising talent and run a very sound and successful outfit based on many of the values of Ford.

“We look forward to seeing the likes of Shane van Gisbergen challenge for the title and return SBR to their winning ways in the very near future.”