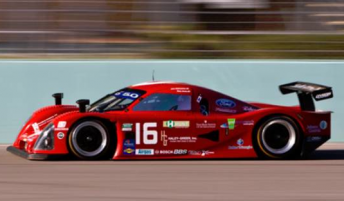 A Grand-AM prototype, similar to what Australian Daniel Erickson will compete in at the famous Daytona 24 Hour race

Daniel Erickson will compete in America’s iconic sports car race, the Rolex 24 at Daytona on January 29-30.

The 23 year-old Sydney driver will co-drive a Primus Racing Crawford-Chevrolet in the 49th running of the classic race at the legendary Florida racetrack.

Erickson was thrilled at the prospect of sharing the racetrack with some of his motorsport heroes in the famous event.

“It’s an honour just to be invited to drive in such a prestigious race,” he said.

“I’ve always wanted to meet Martin Brundle, Scott Pruett and Jimmie Johnson because they’ve won at the sport’s highest level, but to have the opportunity to race against them in similar machinery will be an unbelievable experience!”

Erickson comes to the enduro as the 2010 American F2000 Championship Series Rookie of the Year, but admits that the V8 sports-prototype will be radically different from the openwheelers he has driven to date.

“A Daytona Prototype has nearly double the power-to-weight ratio of an F2000, as well as bigger tyres and more sophisticated aerodynamics, so I’m expecting a massive increase in performance,” he said.

He added that the 5.7km Daytona road course, which combines the high-banked stock car superspeedway with a tight infield section, and the 24-hour race would present their own challenges.

“I’m looking forward to driving at Daytona, with its 31-degree banking, and racing at night – they’ll be new experiences too!”

Erickson was relieved that Primus Racing owner Jon Baytos, who masterminded his F2000 Championship Series campaign, would be calling the shots from the Daytona pit lane.

“Jon did an amazing job for me in F2000 this year, overcoming all sorts of problems with his knowledge and experience,” he said.

“We get on well together because we both set high standards – there’s no-one else I’d rather have as a team manager.”

Erickson will fly to America later this month to test the Daytona car at MSR Houston Raceway.

While the car will be unfamiliar he won’t have to learn the circuit, which he lapped within a tenth of a second of the class benchmark time in his first test drive of a Star Mazda openwheeler 12 months ago.

He’ll remain in the USA for the official Grand-Am ‘Roar Before the 24’ practice sessions in early-January.

Between then and the Rolex 24-hour race he plans to test a Formula Star Mazda again, with a view to contesting the 2011 US national Star Mazda championship.