Centaur set to switch from Holden to Ford

Centaur set to switch from Holden to Ford 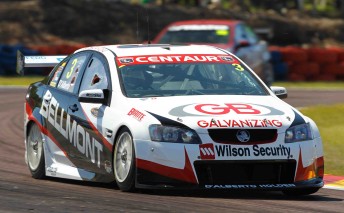 Centaur Racing appears set to cross the great divide in 2011 by switching from Holden to Ford.

The Victorian-based team is currently selling its Walkinshaw Racing Commodore VE and is poised to campaign a Ford Performance Racing-built Ford Falcon FG in next year’s V8 Supercars Championship.

Speedcafe.com.au has learned that the D’Alberto family team is likely to purchase a Falcon FG from FPR and run it out of its base at Knox, Victoria, with technical assistance from the factory team.

The team would not make comment when contacted by Speedcafe.com.au.

Centaur Racing recently confirmed that it has secured its own full-time race engineer. Adam DeBorre switches to Centaur after stints at Tasman Motorsport and Paul Morris Mototrsport. CLICK HERE for full news story.

A change to Ford would be the first time that Tony D’Alberto has competed in a V8 Championship Series in anything but a Walkinshaw Racing-built Commodore. Since 2005, the team has been associated with WRs in both the Fujitsu V8 Series and Championship Series.

In 2007, the 25-year-old won the Fujitsu V8 Series and has competed in the past three V8 Championships with the same WR001 chassis, collecting a number of top 10 finishes.

While it appears to be a major switch for D’Alberto, it won’t be the first time that he has raced a Ford. He drove a Howard Racing Falcon AU in a non-championship development series race at Bathurst in 2004. After an accident in practice, he bounced back to finish in third place – his first podium in V8 Supercars.