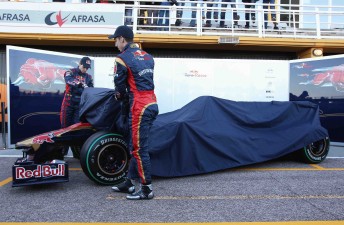 The unveiling of this year's Toro Rosso

Toro Rosso and Sauber have announced the unveiling dates of their 2011 Formula One race cars.

Toro Rosso, the sister team to constructor’s champions Red Bull Racing, will show off its STR6 on the same day as its track debut at Valencia’s Ricardo Tormo circuit on February 1 – the first day of the testing season.

The Toro Rosso team has said that the launch will take place in the pit lane at the Spanish venue before the on-track activities where it is expected that its 2010 diver line-up of Sebastien Buemi and Jaime Alguersuari will retain their driving slots. Australian Daniel Ricciardo has already been confirmed as the team’s Friday driver.

At this point, Sauber is the only other team to have officially announced when they will unveil their 2011 car. The Swiss-owned team will take the covers off the new C30 the day before Toro Rosso (January 31) at the Valencia circuit.